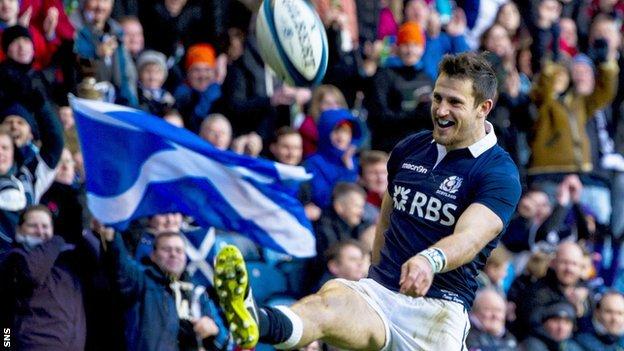 The 25-year-old, winning his third cap, scored the first and third of Scotland's six tries in their opening autumn international.

"I'd like to think the supporters can come away from here and hope for the future looking bright," said the Glasgow Warriors winger.

"We've gone on the attack and scored some points so that's positive."

It was massive for us. [We're] disappointed with [conceding] the two tries but the maturity of the team showed and it's a great building block for us.

Interim head coach Scott Johnson's side were frustrated by the Japanese for long periods before the floodgates opened midway through the second half.

Greig Laidlaw, Al Dickinson, Duncan Weir and Sean Lamont were the others to touch down for the hosts.

"It's great to finally get out here at Murrayfield and play a game," Seymour said.

"To get two tries is really special for me. My parents were in the stand and they haven't been able to watch me play for a little while.

"There's parts of the game we're not too happy with, and a couple of those things personally, as well, didn't go the way I'd want them to but I'm not going to complain.

"We've got to look at it as one step at a time. We're building towards something, which is the World Cup in 2015."

Edinburgh Rugby captain Laidlaw had mixed fortunes with the boot but scored the second try after the break.

Japan's impressive winger Kenki Fukuoka twice pegged the Scots back before they finally pulled away.

"For the first game, we'll take it," said Laidlaw.

"We're a little bit annoyed we gave them two soft tries so we need to look at that, but we've scored 42 points and two or three nice tries."

Scotland play South Africa on 17 November and Australia on 23 November.