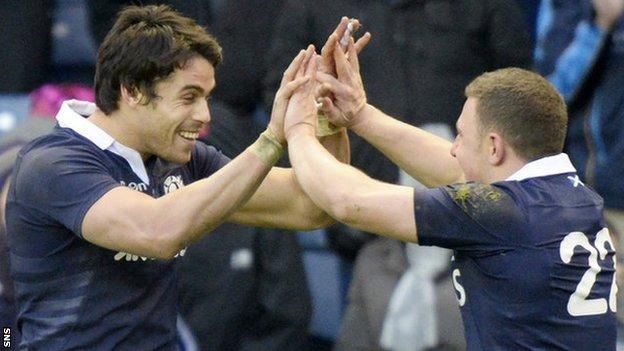 Scotland coach Scott Johnson said he would sleep on whether to take more positives or negatives out of the 42-17 win over Japan at Murrayfield.

"I am trying to see the bright side over the negative," he said.

"The negative was their two tries. The bright side - every time they did score a try, we walked back and scored another one straight back.

"I am thinking to myself, why does it take the catalyst of them scoring a try for us to have a bit of urgency?"

We want competition for spots. We want a good bench, because we're at the mercy of a bang or two

Two tries from winger Kenki Fukuoka at one stage had Japan threatening the Scots' lead at 18-17.

"So I'm caught between a 50-50 looking at the positive and the negative here and it depends on how good my night is how I look at that," admitted Johnson.

"It was a good Test match. We said before the game they are a formidable side now and a really good rugby nation.

"So it was a tough Test match and they contributed to a reasonable spectacle, I thought."

However, Glasgow Warriors forward Tim Swinson, like Seymour making his Murrayfield debut, was the standout performer as he won his third cap.

"Tim is a wonderful player," said Johnson. "He has been superb and he has supported our faith in selecting him first up.

"It was great to see him out there playing great rugby.

"We don't always agree on the man-of-the-match awards, but there was a consensus that the pundits got this one right."

Forwards Ryan Grant and Al Kellock were replaced during the game having been concussed, while centre Matt Scott suffered a bang to the hand in the last play of the game.

Johnson, whose side next face South Africa and Australia in their autumn Test series, was delighted that the depth of his squad was improving considering the physical demands of modern rugby.

"We want competition for spots," he added. "We want a good bench, because we're at the mercy of a bang or two.

"I don't want to be a coach talking about injuries. I want to say 'this guy's good enough to play for his country'.

"So a couple of bangs will test us again and test the reserves, so that's good for us."