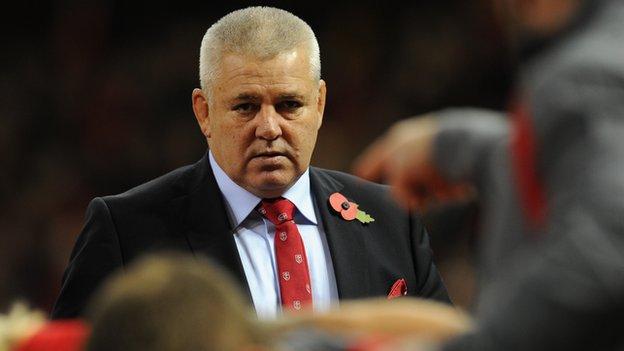 Coach Warren Gatland says teams such as South Africa benefit from higher levels of competition compared to his players.

Gatland says the Springboks' recent second-place Rugby Championship finish behind New Zealand offered a stronger grounding than the largely Pro12 games his players have been involved in.

"You could feel they [South Africa] were pretty organised," said Gatland after seeing his side lose in Cardiff.

"That's the big difference and the advantage that southern hemisphere teams have over us.

"Coming out of club rugby or regional rugby, talking to our players, and it's chalk and cheese, the difference."

The New Zealander fielded 11 British and Irish Lions in his starting line-up and two more came on as replacements.

But centre all departed before the break because of injuries.

Gatland added: "The opportunity that South Africa and southern hemisphere teams get to play at that level all the time, whether in the Championship or Super rugby, we get maybe four or five times a year.

"It's not the fitness or physicality, it's that tempo and speed of thought and it sometimes takes a bit of time to get used to it.

"The southern hemisphere sides have been together for a few months.

"That's why every autumn we want to play the best teams in the world because that's what prepares us.

"Ironically, it's almost like pre-season getting ready for the Six Nations but we don't want it to be like that because we want to hit the ground running and beat these teams.

"The players are disappointed, but win next week [against Argentina] and get three wins out of four and we'll be reasonably satisfied.

"It's just the fine margins."

However, Gatland believes Wales are edging closer to taking the major southern hemisphere scalp they crave.

"I don't feel like we're far off," Gatland said, as he looked forward to that clash against the Pumas followed by Tonga and Australia.

"We're disappointed with the result but the boys never gave up. [There's a] lot of positives and things to work on.

"If you look at the stats in terms of territory, possession and the line breaks we created it's a close game.

"We just need to be more clinical in terms of finishing off chances."

He also lamented the late try that killed off Wales' challenge after they fought back to 17-15 down and believes the home side should have asked referee Alain Rolland to refer the incident to the television match official.

Television replays showed centre Jaque Fourie was offside in the build-up to the scoring pass he gave to scrum-half Fourie du Preez.

"You look at the replay and think Fourie's in front of the kicker wouldn't have scored that last try, which the ball could have bounced anywhere.

"Rather than being 17-15 going into the last few minutes we ended up conceding a try in the last 10 and it's taken the game away from us."