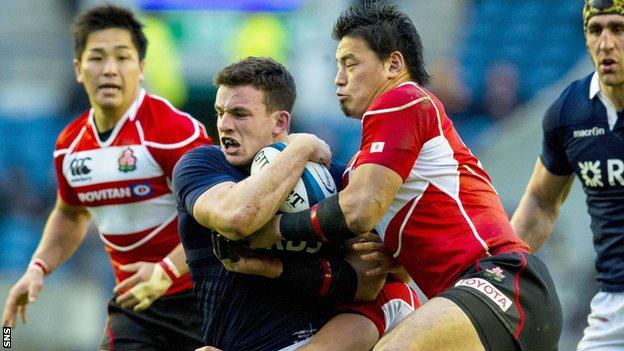 Edinburgh centre Matt Scott picked up a hand injury in Saturday's 42-17 win over Japan that will be examined by a surgeon on Monday.

Forward Tim Swinson has a shoulder problem, while his club-mate, fly-half Duncan Weir, has a groin strain.

As ever with soft tissue damage, it can be 48 hours after a match before the scope of any injuries becomes clearer

Scottish Rugby says it will be 48 hours before they know the extent of the injuries.

Scott, who picked up his injury in the last play of the game in Edinburgh, will be seen by the consultant hand surgeon, Doug Campbell, at SPIRE Hospital in Leeds.

Scotland team doctor James Robson said: "Matt requires further assessment before we can ascertain the full extent of his injury."

Of Grant and Kellock, who both went off injured against Japan, Robson added: "Both sustained concussion and will now follow the graduated return to play protocol."

That means they could yet be passed fit for Sunday's visit by the Springboks.

Swinson, who was awarded man of the match as he played a home international for the first time, and Weir will also be further assessed on Monday.

"As ever with soft tissue damage, it can be 48 hours after a match before the scope of any injuries becomes clearer," stressed Robson.

"Yesterday was a full-blown Test match with the consequent assortment of bumps and bruises."

Scotland take on Australia six days after the Springboks match in their third and final autumn Test.