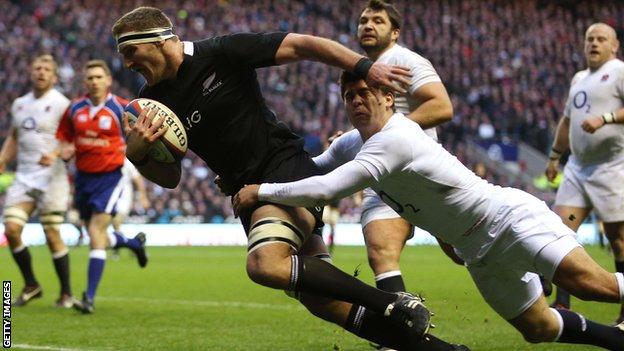 England hooker Dylan Hartley says revenge will be on the minds of world champions New Zealand when they go to Twickenham on Saturday.

Hartley starred as Stuart Lancaster's side followed up a 20-13 victory over Australia by beating Argentina 31-12 on Saturday - their ninth win in 10 games.

England stunned the All Blacks 38-21 in December and Hartley said: "There's no doubt they'll want revenge.

"They're a proud nation and a proud team and will be looking for payback."

New Zealand-born Hartley added: "The All Blacks have been fantastic on recent form and come here with a big number one badge on.

"We'll have to be up for it and play the perfect game - for the whole game."

New Zealand made it 12 wins out of 12 in 2013 with a 26-19 victory over France in Paris on Saturday but England's performance attracted criticism.

Having scored three tries in a dominant first-half display against the Pumas to lead 24-6 at the break, there was a subdued atmosphere in the second-half at Twickenham as England had to wait until two minutes from time for their next points, when replacement Ben Morgan crossed for their final try.

"Let's focus on the positives of the second half - we closed the game out and kept knocking them back with our defence," said the Northampton man, who hopes he has done enough to retain his place ahead of Tom Youngs for next weekend's match.

"The coaches talk to me about the energy and leadership I bring," he added. "I know why I'm in the team and why I was given the opportunity. I like to think I've made the most of it."

Meanwhile, coach Lancaster defended his team's display after the interval and said: "The second half, they probably got more moments than we would have wanted but I thought our defence was excellent. If you offered us 31-12, we'd have taken it."

The victory over the Pumas was England's sixth in succession at Twickenham and a 30-3 defeat by Wales in the Six Nations decider last March remains their only loss in 2013.

Looking ahead to the All Blacks, Lancaster added: "You've got to give New Zealand the respect they deserve as a team but you've also got to give your own team self-belief and the belief that they can win.

"The players are delighted to have got two from two [in the autumn series]. That's nine out of our last 10 internationals we've won, so we've got an inner confidence building.

"But we recognise the challenge that's coming our way."