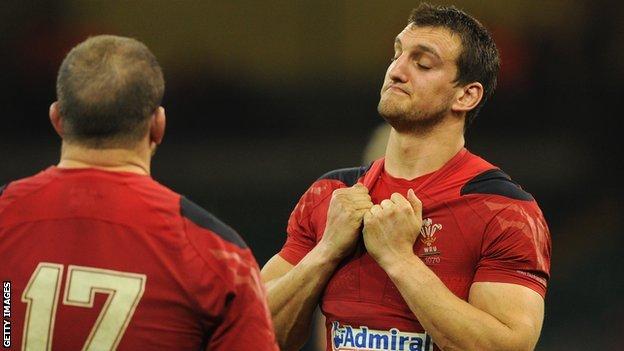 Wales captain Sam Warburton expects to win the remaining three autumn Tests, and says beating Australia and South Africa is "what we should expect".

Wales lost 24-15 to the Springboks on Saturday and now face Argentina, Tonga and Australia in the rest of the month.

"We've been working too hard - we're too good. I'm expecting three out of four for this autumn," said Warburton.

"I wouldn't have been jumping for joy [if we'd beaten the Springboks] because that's what should just happen."

He added: "That's what we should expect. We shouldn't be bouncing around and celebrating like it's Christmas."

Wales, the 2012 and 2013 Six Nations champions, have not won a home autumn international for four years, having failed to win any of their last 11 since Shane Williams scored two tries in a 33-16 victory over Argentina in November 2009.

The Pumas, Wales' next opponents at the Millennium Stadium on Saturday, won in Cardiff last year but have struggled to match the three former Tri-Nations countries in the Rugby Championship, in which they recently finished bottom without a win for the second year running since joining the expanded tournament.

Argentina lost 31-12 to England on Saturday, their first match since Daniel Hourcade took over as coach from Santiago Phelan.

Tonga are Wales' third autumn opponents but their next chance to take the big scalp they crave comes when Australia visit Cardiff at the end of the month.

Warburton, who led the 2013 British and Irish Lions to their 2-1 Test series triumph, has played in seven of the eight successive defeats Wales have suffered by the Wallabies.

"It doesn't annoy anybody more than me," he said. "I'm getting fed up of it now."

However, despite another autumn international defeat, the Blues flanker says he enjoyed every minute of the clash against the Springboks.

"It wasn't the quickest game I've played in compared to sides like New Zealand and Australia," he added. "Physically we were all looking forward to that battle and I loved it."

Wales fielded 11 British and Irish Lions in their starting line-up and two more came on as replacements.

while there are doubts over tight-head prop Adam Jones and wing Liam Williams.