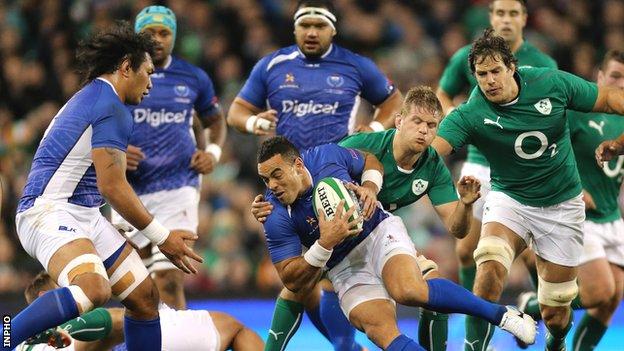 Ireland flanker Chris Henry will miss the games against Australia and New Zealand because of a hamstring injury.

Henry is expected to be out for six weeks although fellow Ulster player Tommy Bowe should recover from a calf injury in time to face the Wallabies.

Shane Jennings replaces Henry in the squad while wing Luke Fitzgerald has been called up as cover for Bowe.

Jackson impressed in Saturday's 40-9 victory over Samoa but coach Joe Schmidt has indicated he is likely to recall first-choice fly-half Sexton of Racing Metro.

"We have to strongly consider Jonny coming back in. He does bring that experience and that quality that we know he has," said Schmidt.

"But I would have to take my hat off to Paddy Jackson."

Henry will also miss five games for Ulster, including the Heineken Cup double-header against Benetton Treviso.

The back-row and Bowe were both forced off during the comfortable win over Samoa.

"It's really disappointing for him to be literally hamstrung. He tried to play through it, but it was determined that it wasn't something he could play on with," said Schmidt.

Australia scored seven tries in Turin at the weekend as they came from 10-0 down to win 50-20.