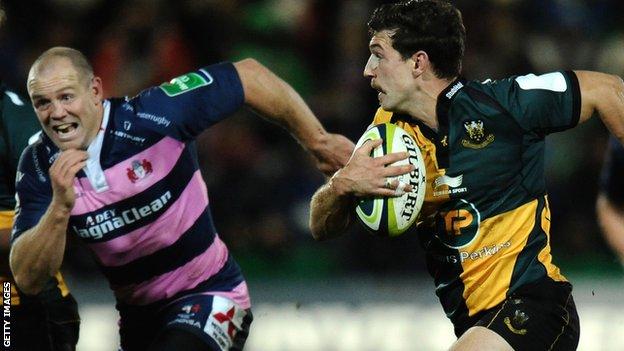 The 26-year-old captained Saints in their LV= Cup win over Gloucester, making his first start of the season.

King told BBC Radio Northampton: "He just needs to play some games. I know the class he has.

"He works incredibly hard at his game and he's probably one of the best players in the game in terms of intelligence and his decision making."

We've got Kahn Fotuali'i and Lee Dickson. There aren't too many clubs with two international, starting scrum-halves on their books

He added: "He's an integral part of this team going forward."

Waldouck was at Wasps with King, prior to the coach's move to Clermont Auvergne.

Saints were 33-6 winners at Franklin's Gardens on Saturday, and King was delighted by the showing of the youthful side.

"For a lot of these guys, it's a first time playing in front of such a large crowd," he said.

"I was especially pleased for the young guys coming in and they took their opportunity with both hands. A performance like this puts pressure on the other guys."

"Alex finished off the job that Ryan had started," said King.

"He injected a bit of tempo into the game and I'm delighted for him because it's about taking your opportunity.

"If you're a scrum-half at this club, we've got Kahn Fotuali'i and Lee Dickson. There aren't too many clubs with two international, starting scrum-halves on their books.

"It's a tough business and when the opportunity does come, you've got to be in the right place and got to be ready."