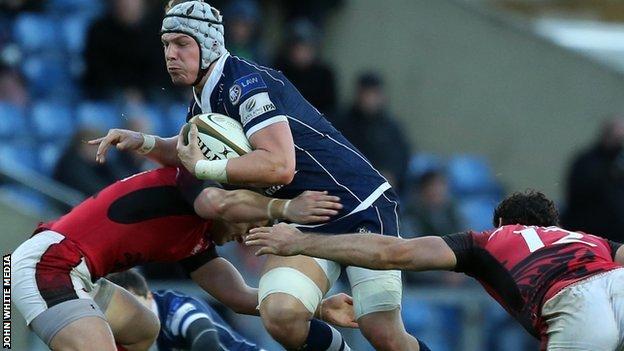 Coach Sean Holley says Bristol will persist with their game-plan of not kicking penalties, despite their 22-7 defeat by London Welsh.

In Sunday's top-of-the-table clash, visitors Bristol could have earned 18 points from kicking for goal.

Instead they opted to go for the try-line from an attacking line-out, but only Ross Johnston managed to cross over to score.

"You've got to take a bit of the rough with the smooth. It was always going to be a close game.

Bristol have not kicked a penalty in a Championship game since the second match of the season against London Scottish.

"We want to show the players that you have to stretch sides, you have to go beyond and score tries - and kicking penalties will come at some stage.

"We're getting these opportunities and we know we can score tries. We've just got to be more accurate and take them, and apply that pressure to the opposition."

It was Bristol's first league defeat since the opening day of the season and came after five successive bonus-point victories in the Championship.

Leaders London Welsh now have a six-point advantage over Andy Robinson's side in second place.

"We're not far away. What we've seen is a classic away performance by the home team," added Holley.

"We've dominated all the statistics, in terms of territory and possession- apart from the scoreboard, which is obviously the most important."