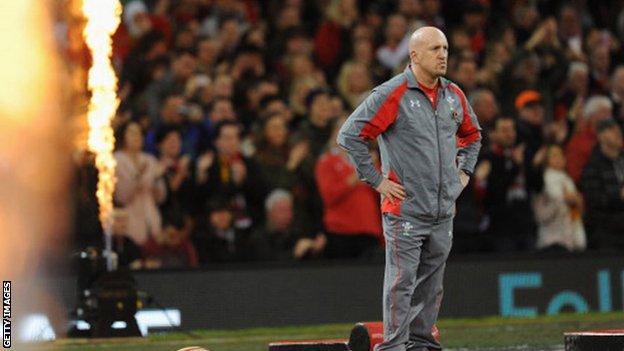 Edwards was proud of how his side, who face Argentina on Saturday, stood up to the physical nature of an "epic" Test.

"Three or four years ago we'd have got blown away," said the former Great Britain rugby league international.

"The intensity was definitely a step up for everybody. I was really proud of the way they hung in there with the amount of injuries we had."

Davies, who is joining French Top 14 side Clermont Auvergne, will miss Wales' remaining autumn internationals against Argentina, Tonga and Australia.

But Edwards believes the team will feel long-term benefits from Saturday's bruising encounter.

"I thought it was a Test match of epic proportions," he said. "I thought the breakdown in particular - the intensity, the aggression, the technique was outstanding.

"Playing at that level can only put us in good stead because there's no doubt it was a step up and I think we matched that, particularly at the breakdown."

Edwards said it would have been "very easy for us to fold" when injuries struck but was pleased how his side coped with "pretty much the most physical team on the planet".

"I said to the players straight after the match that good times will be ahead," he said.

Wales must now decide how to compensate for the loss of three of the four three-quarters who finished the Six Nations decider against England in March.

"We're going to be trying to get combinations and confidence in each other," he added.

"It's important for me to remember I'm never going to get them up to the level of Jamie Roberts and Jonathan Davies's understanding, because they've played together a record number of times at centre.

"So it has to be realistic in terms of my expectations of where we can get them, but hopefully that is to a level sufficient enough to win on Saturday."