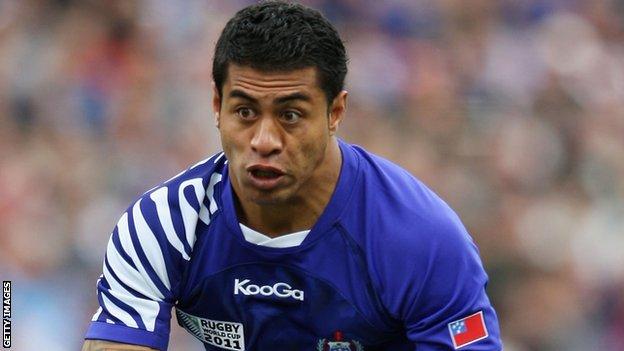 Samoa centre George Pisi has been given a six-week ban following a tackle on Ireland wing Tommy Bowe during last Saturday's game in Dublin.

The Northampton player was cited for a dangerous tackle after being yellow-carded in Ireland's 40-9 win.

Pisi successfully argued that the incident should be considered as a 'tip tackle', to which he pleaded guilty at a disciplinary hearing on Tuesday.

However, the disciplinary panel decided the tackle merited a red card.

Pisi claimed the incident did not warrant a red card, but the committee did not agree and decided the punishment deserved a mid-range entry point of an eight-week suspension.

That was then increased by two weeks as a deterrent with regard to tip tackles, before four weeks were taken off after various mitigating factors were taken into account.

Pisi, who has the right of appeal, cannot play again for club or country until 23 December.