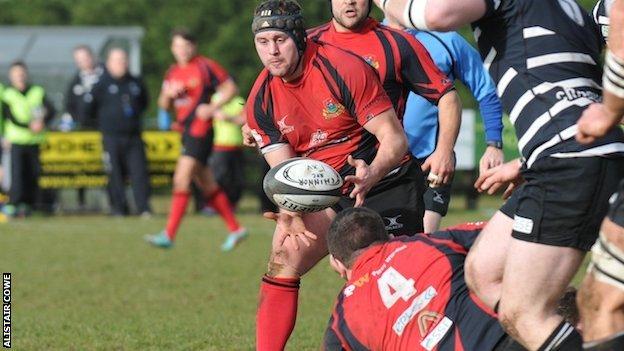 Redruth coach Ashley Morcom has said his players made life difficult for themselves despite earning a 38-28 win over London Irish Wild Geese.

The Reds trailed 25-10 at the break, but stormed back in the second half for a bonus-point win.

"I think the boys were a bit complacent in the first half but I gave them a few rockets and we came out a different team," he told BBC Radio Cornwall.

"We've got a very good outfit but we were too lackadaisical."

Morcom said he would prefer not to have to resort to the half-time 'hairdryer' treatment.

"We've got to make sure we come out fighting like we did in the second half," he said.

Full-back Tom Notman opened the scoring with a try after just one minute but admitted the team had struggled to maintain that level afterwards.

"It was a tough game, especially as we haven't performed well for the last two weeks," he said.

"It was a dodgy first half with missed tackles - myself included - but we got on board with what we needed to do in the second half.

"Redruth have been known over the years for having brilliant defence and maybe this year we've slipped off a bit, but we're training on it week-in, week-out and it will get better.

"Maybe we got a bit ahead of ourselves after a great start. We needed half-time and in the second half we showed what we can do."

Captain Damien Cook added: "In the second half we went direct and straight like the Redruth of old. They couldn't live with us and didn't score at all in the second half."