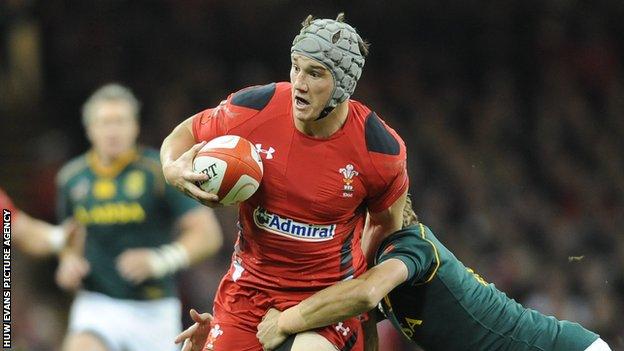 Centre Jonathan Davies will become the latest Wales international to join the exodus to France after signing a two-year deal with Clermont Auvergne.

The Scarlets captain, 25, will join the Top 14 side at the end of the season.

Davies, who is out for up to four months with a pectoral injury sustained against South Africa, will join fellow Welshman Lee Byrne at the club.

"His profile fits perfectly to the game that we practise," said Clermont sporting director Jean-Marc Lhermet.

When Davies, who has 37 caps, moves to Clermont next July he will join a list of Wales internationals in the French top flight that also includes former Scarlets and Wales team-mate Byrne.

James Hook and Luke Charteris are both at Perpignan, while Jamie Roberts and Dan Lydiate both joined Paris side Racing Metro this season, although scrum-half Mike Phillips is no longer playing in France after being sacked by Bayonne.

Davies' departure from the Welsh regional scene will be seen as a huge blow for both the Scarlets and the Welsh Rugby Union, with the four regional teams struggling to keep leading players who are nearing the end of existing contracts - Davies' deal expires at the end of this season.

The one compensation for Wales is that Davies will be fully available to play international rugby after he joins Clermont.

"He has got full release, similar to Jamie Roberts and Dan Lydiate [both Racing Metro], so in terms of his availability to play for Wales in an autumn series he would be fully available," said Howley.

Scarlets head coach Simon Easterby said it would have been a difficult decision for Davies to make.

"He has always taken great pride in having his rugby roots in West Wales and I know this will have been a tough decision for him personally, and probably one of head over heart," he said.

"His commitment to our region during this, the first part of his rugby career has been evident and I know that having grown up in our region he will always want to be closely associated with Scarlets rugby now and in the future."

Clermont, who were runners-up in last year's Heineken Cup, announced the deal - there is also the option of a third season - on their official website.

Sporting director Lhermet added: "We can only be delighted to welcome Jonathan.

"Despite his young age, he has a huge experience of high-level matches and is one of the world's best players in his position. He will be an asset to our team.

"Jonathan decided to leave Wales for a new adventure, and we are happy that it is with the 'yellow and blue'.

"In addition to his class, he has determination to help us win new titles in the years to come."

Davies was one of the Lions' stars in their victorious tour of Australia in the summer, playing in all three Tests.

He played for Wales in last Saturday's Test defeat by South Africa, but suffered the chest injury that forced him off early in the game.

Wales have confirmed Davies will have surgery this week and will miss the remaining autumn games with Argentina, Tonga and Australia, and