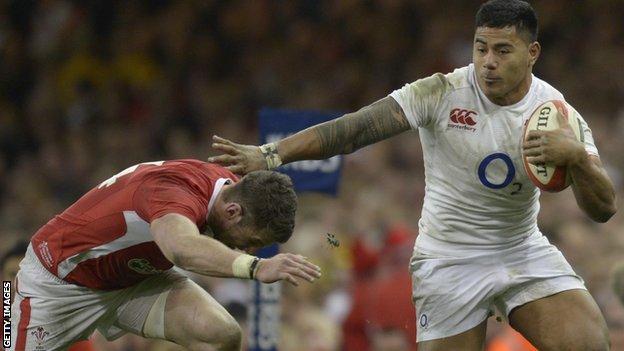 England centre Manu Tuilagi is in danger of missing the Six Nations after having surgery on his chest muscle injury, reports BBC Radio Leicester.

Tuilagi, 22, tore a pectoral muscle in Leicester's Premiership match against Newcastle in September, but was hoping to be fit by the end of November.

And, even if he is fit to resume training then, he still only has an outside chance of being available for the final two games of the England's Six Nations campaign - against Wales on 9 March and Italy on 15 March.

Cockerill added: "Unfortunately Manu has not been able to recover from his pectoral injury by rehab so he had surgery on Monday to repair that.

"It was the right process to go through to try and rehab it and avoid surgery. But he had a reaction right at the end of his rehab, thus he will probably be out for three months so that's obviously disappointing - and a blow."

England play France at the Stade de France on the opening weekend of the Six Nations, with fixtures against Scotland the following week, and Ireland on 22 February.

Tuilagi's injury meant he has not been available for England's trio of autumn Tests, against Australia, Argentina and New Zealand.

He has played 21 times for England since making his debut against Wales in August 2011 and featured in the final Lions Test against Australia this summer as a replacement.

England fly-half Owen Farrell told BBC Radio 5 live: "If he is out for the Six Nations, he's obviously a big player for us and we'll be gutted for him, but there are a lot of good players in this squad.

"We wish him the best of recoveries."