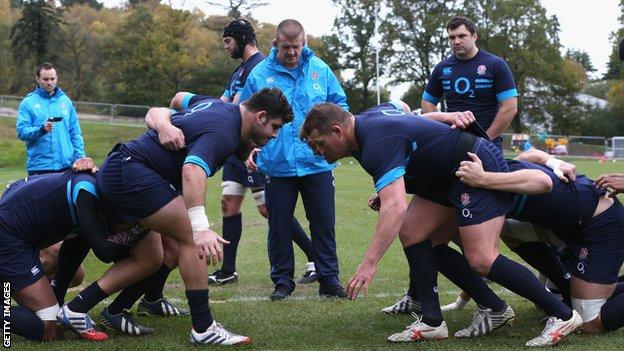 England forwards coach Graham Rowntree believes his side can get the better of New Zealand's pack in Saturday's Test at Twickenham.

The All Blacks have not lost since the surprise 38-21 defeat by England last December, and have won all 12 of their matches so far in 2013.

"Argentina, without inspirational captain Juan Martin Fernandez Lobbe, were second best in the scrum and blitzed at the breakdown.

"Hooker Dylan Hartley's bristling display, and solid performances by props David Wilson and Joe Marler at least demonstrated that there is healthy competition for places, none of them having started last week.

"The pace and fluidity of England's forwards even spilled over into the backline."

Read the rest of Dirs' reaction to England's win against Argentina

But Rowntree, 42, believes his forward pack can gain the upper hand up front.

When asked whether the New Zealand pack were there for the taking, he told BBC Sport: "Yes, we believe so."

He continued: "But we'll be focusing on ourselves.

"We get ourselves up to the potential we can play at, and I'm sure we'll be a match for anyone.

"I know there is a lot to come from this England group, and they are super-excited about this game at the weekend."

And Rowntree says the current group of England forwards is as good as he has had in his time as coach.

"I am confident in that," he said. "And they all know they have more to come."

England have injury concerns at loose-head prop, after Mako Vunipola was ruled out with a knee problem. Alex Corbisiero has a troublesome knee that requires monitoring.

Joe Marler is expected to return to training on Thursday after being concussed in the 31-12 win against Argentina last weekend.

Rowntree admits the England coaches have a close call to make at tight-head, with Dan Cole and David Wilson starting one game each so far this month.

England have been the only side to beat New Zealand since the All Blacks won the World Cup in 2011, and Rowntree is confident they can shock the world champions for the second year in a row at Twickenham.

"I'd say it would be quite a sizeable feather in our cap, to put it mildly, because they are the world champions and it's the ultimate challenge playing against these guys as a player. But I honestly feel it is within our reach," he said.