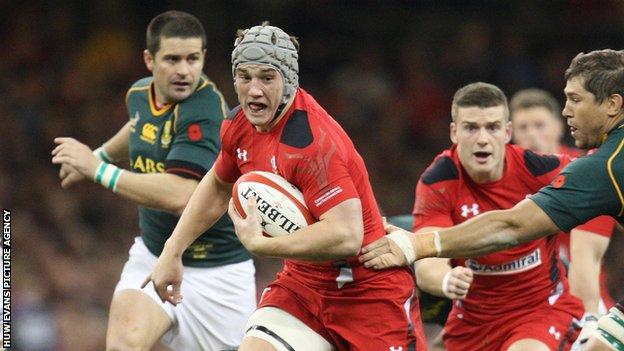 British and Irish Lions centre Davies is out of contract with the Scarlets at the end of the season and has signed a two-year deal with Clermont Auvergne.

Charteris, who joined Perpignan from Newport Gwent Dragons in 2012, believes the 25-year-old will thrive.

"I think a season over there [in France] and he'll come on leaps and bounds again," said lock Charteris.

"While it's maybe not such a good thing for the regional game, it will be a massive plus for the national team."

Charteris is "loving" playing in France and thinks his rugby has "come on" from playing in the Top 14.

He added: "I think for Jon... going to a team like Clermont - just imagine himself and [Wesley] Fofana in the centre - he's just going to get better and better."

Davies played all three Tests in the Lions' series win in Australia in the summer and impressed again in the opening moments of at the weekend, before being injured in the 12th minute and replaced.

The Scarlets captain sustained a pectoral injury that will while Davies could also miss the start of the Six Nations in February.

"We saw in the first 10 minutes that he played at the weekend how good a player he is, and we've seen that with the Lions and with Wales," added Charteris, who ruptured knee ligaments in December 2012 but came off the bench against South Africa to win his first Wales cap for 11 months.

"He'll be playing in a team... playing a good style of rugby, a similar sort of thing for us in Perpignan. It's just going to drive him and drive us to be better players."

Charteris was one of the first Wales players to move abroad who negotiated full release for international duties, including training camps.

Davies has followed suit to guarantee his French adventure does not interfere with his country's needs, and Charteris believes full Test release is becoming more common.

"I think the French teams realise now if they want to get the players they have to buy in that these boys want to be playing international rugby," Charteris said.

"All of us have got slightly different releases... it's just about trying to get as much as you can, because the whole point of going over there and improving yourself as a player is to be able to come back here and perform for Wales."