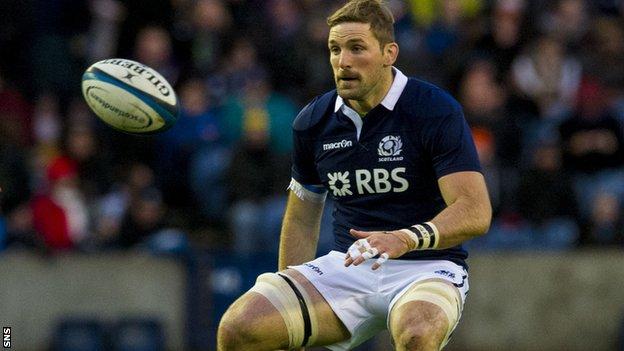 John Barclay replaces Scotland captain Kelly Brown in one of six changes for the autumn Test against South Africa.

Richie Gray, whose younger brother Jonny is on the bench, is restored to the second row.

Greig Laidlaw will captain the Scots in Brown's absence, with the Saracens flanker not named in the 23-man squad.

The younger Gray is the only uncapped player in the squad and should the teenage lock take to the field it will take the sets of brothers to have been capped for Scotland to 47.

Sunday's Test will be Glasgow prop Low's first start for Scotland since the 2011 World Cup warm-up international against Italy.

He insisted the captain had not been dropped, but "rested".

"Its puts competition for spots and that's what we're about this autumn."

Johnson also believes making so many changes will benefit the team in the build-up up to the 2015 World Cup.

"We've got a big two years ahead so we have to take the pain now," added the Australian.

"We've got to have a look (at players) and compete.

"As I've said before everybody wants to go to heaven but nobody's prepared to die.

"This will be good for this group of players in the long term. I'm not going to shy away from this. At the end we'll be rewarded if we get it right."