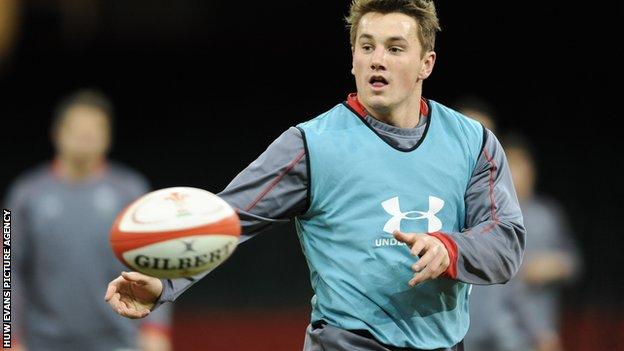 Ex-Wales captain Phil Bennett is calling for immediate action from the Welsh Rugby Union and the regions to keep leading players in Wales.

Centre Jonathan Davies, 25, will become the latest player to join the exodus after

Bennett says action needs to be taken to prevent others leaving.

"We want to see our star players playing in Wales and we've got to get our act together very quickly," Bennett said.

"We set up a board, the regions and the Welsh Rugby Union [Professional Regional Game Board] to sort out Welsh rugby.

"I've not heard a lot of noise coming from that board."

He [Davies] wants to be part of a winning team, winning medals and obviously he's gone to a side which he feels that is going to be right up there in European rugby

The WRU has offered to help the four regions keep their leading Welsh players in Wales following a number of high-profile departures in recent years.

Welsh rugby's governing body said it would employ all of the regions' leading Wales players whose deals expire in 2014 amid uncertainty over the future of the Heineken Cup.

Welsh internationals Alun Wyn Jones and Adam Jones of the Ospreys and Cardiff Blues pair Sam Warburton and Leigh Halfpenny are out of contract next summer.

British and Irish Lions star Davies will join Clermont Auvergne at the end of the season on a two-year contract when his current deal with the Scarlets expires.

Former Wales and Llanelli fly-half Bennett says the departure of Davies, who is out of Wales' autumn series with a pectoral injury, will be a blow to the region.

"To lose Jonathan Davies is a huge blow. He's turned out, as he showed on the Lions tour, to be an outstanding centre," Bennett added.

"I think he's the best centre in Europe and probably in the top six in the world.

"The Scarlets would have done everything in their power to keep Jonathan Davies at Parc y Scarlets, but sometimes we cannot match the money the French offer."

But Howley added he would prefer Welsh players to stay in Wales, which would allow the national team selectors to closely monitor their progress.

"It's not out of sight out of mind," Howley said.

"But obviously our players who are here in Wales, we want them because ultimately Welsh supporters want to watch the best.

"We want to watch the best on a Friday and Saturday night as opposed to going over to France or over the [Severn] bridge to England.

"I've spoken to Jon over the last couple of months and obviously been aware of the decision that he was going to make. I'm aware that he's an ambitious player.

"He wants to be part of a winning team, winning medals and obviously he's gone to a side which he feels that is going to be right up there in European rugby.