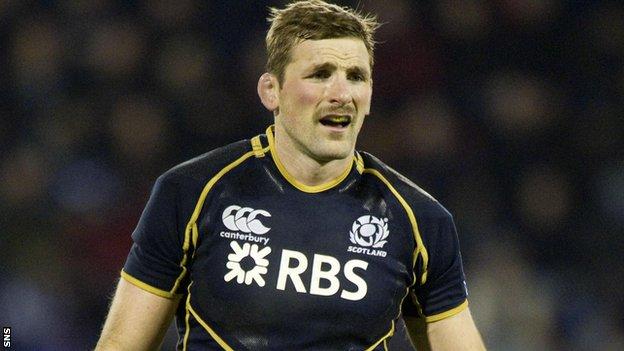 And here it is: five changes in the forwards, one in the backs and six on the bench as Scotland prepare to face South Africa on Sunday.

So what's the big news?

Of the demotions, Kelly Brown's non-involvement will raise a few eyebrows for sure.

Recent British and Irish Lion Ryan Grant has been dropped to the bench and Tim Swinson, man of the match last week, is jettisoned.

A one-dimensional arm-wrestle with South Africa will only end in a home defeat; the Springboks are the most physically dominating team on the planet

But let's look at the thought-processes behind these selections.

Were any of these players dropped for poor performances against Japan on Saturday? No.

Brown makes way for John Barclay, creating a good balance in the back row: two ball-carriers are kept intact whilst having an out-and-out open-side to aid possession and slow down opposition ball.

Alasdair Dickinson retains the loose-head prop position that he held for the majority of the Japan game due to Grant's concussion, making a good fist of things with 21 clear-outs, six tackles, eight ball carries and a try.

Finally, Swinson - who had a very impressive game last week - makes way for Jim Hamilton, a proven scrummager, line-out co-ordinator and large lump of a man.

Alastair Kellock, who ran a strong line-out against Japan, steps aside for, as Will Greenwood would put it, the 'rock star' of Scottish rugby, Richie Gray.

Euan Murray is replaced by Moray Low - a combative, mobile player thoroughly deserving of his opportunity.

And in the backs, Matt Scott's broken hand has opened the door for Saracens' Duncan Taylor. He's a young, direct player with soft hands who brings a confident, winning mentality.

In the forwards, Johnnie Beattie and Jonny Gray have power and offloading ability whilst Scott Lawson has energy and finesse.

In the backs it's fantastic to see Chris Cusiter back - he'll raise the tempo of the game and attack the fringes - and Max Evans, who can make something from nothing.

These guys will all bring a major impetus to Scotland late in the game when the Springboks' defence begins to tire and the game opens up.

I would perhaps have looked to strengthen the back-three kicking game for this fixture, though, with Greg Tonks featuring.

That's because South Africa's main threat is the driving maul from line-outs and Scotland won't want to give them cheap field position to exploit that.

I'd like to see Ruaridh Jackson give the ball a bit earlier against the Boks. The forwards don't want to be catching the ball on the gain-line and under pressure; instead, take the ball at a bit more depth and have the option to 'tip on' the pass.

This would mean Scotland could take the contact on their terms and produce an easier ruck to win.

Quick ball is the Holy Grail in any game of rugby, but particularly against a side like South Africa who will look to dominate the collisions, slow down the supply of ball to the Scottish half-backs and smother the attack. The 'tip on' will allow the Scottish forwards to shift the point of contact from a front-on collision to side-on, maintaining forward momentum and allowing for swift delivery of the ball to Greig Laidlaw.

Even with a heavy pack of forwards like Scotland have, a one-dimensional arm-wrestle with South Africa will only end in a home defeat; the Springboks are the most physically dominating team on the planet.

Scotland will have to act swiftly in mind and body throughout the game, mix up their attack by using the heavy runners and the wide channels, kick cleverly, chase hard and keep the ball moving as much as they can.

I'd avoid what has become a fairly standard attacking set-up of many teams of hitting in the middle of the pitch and then the forwards coming in an arc around the corner off the scrum-half.

The South African back row will swallow this up. Use some deception around Laidlaw or pass the ball in front of the forwards to Jackson to attack wider out, or avoid the channel altogether by hitting back on the short sides.

Scotland need to be tactically astute and at the top of their game to win.