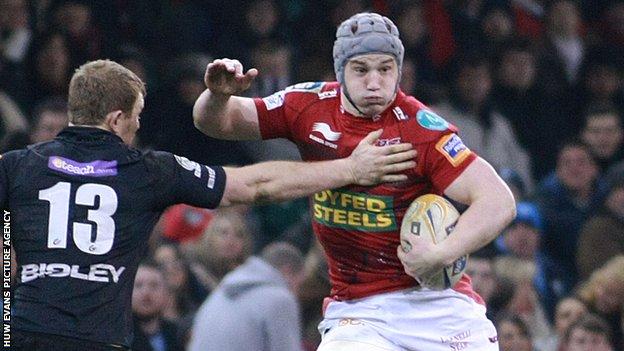 Jonathan Davies says his next season is about improving as a player.

The Wales and British and Irish Lions centre, 25, has spent eight season at the Scarlets after coming through the ranks and paid tribute to the region.

"I felt that the time was right now to test myself rugby-wise in a different environment," Davies said.

"Clermont Auvergne offers me a fresh rugby challenge that I hope will improve me further as a player."

Davies is out of contract with the Scarlets at the end of the season and has signed a two-year deal with Clermont, with the option of a further year.

The Scarlets co-captain has appeared 111 times for the west Wales region, scoring 37 tries, while he has won 37 caps for Wales and three for the Lions on their victorious tour to Australia last summer.

"Deciding to leave the Scarlets has been the toughest decision I've ever made," added Davies, who grew up in Carmarthenshire.

"It's certainly not one I've taken lightly and took some time to think over looking ahead in my career and the exciting opportunities available to me now.

"The club did its very best to find a way for me to continue at Parc y Scarlets and I'm proud to have been part of a region that has such a strong rugby heritage and stands out in the way it invests in local talent.

"Playing for the Scarlets and being part of the west Wales rugby community has been a huge part of my life.

"It's seems almost unreal when I've reflect on what's happened over the past three years and what I've been part of from the World Cup to Six Nations and then the Lions.

"I'm really grateful for the opportunities I've had so far in my career and it's important to me that I say publicly how much I really appreciate the efforts of the people who have shown faith and handed those chances to me."

Davies sustained a pectoral injury playing for Wales against South Africa last weekend that will while he could also miss the start of the Six Nations in February.

"I'm looking forward to when I get back from injury and doing all I can to make sure the Scarlets finish this season on a high," Davies said.

"There's a real drive and ambition from everyone at Scarlets, players and coaches, to compete at the top of the league and Europe.

"They're working hard to strengthen the balance of the squad and the desire and expectation to really compete going forward are high."