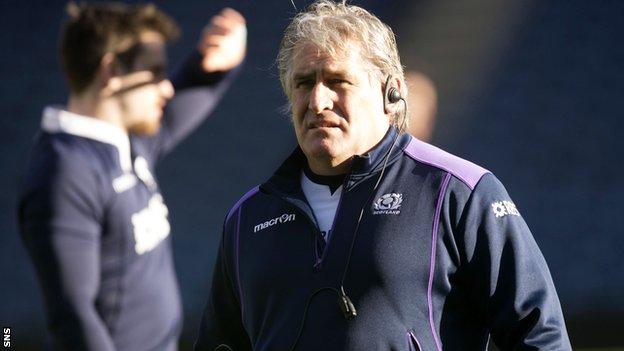 Ahead of Sunday's Test, Johnson said: "I'm sick of people telling me we're small. We're a big side and we're going to start walking and talking big too.

"They are a good side and we accept that but I want my players to play above their weight."

He added: "This game is not won on the scales."

Johnson has made six changes to the line-up that started against Japan.

"There were pleasing aspects of the Japan game but there are also areas we need to work on," he said. "We understand this is another step up.

"This is a quality side; a world-class team in great form. We understand their strengths and we are not going to run away from that. But we are certainly going to play to our own strengths."

The Springboks' front three in Cardiff weighed in at a collective 58 stones.

And Moray Low is licking his lips at the prospect of testing himself against the nation ranked number two in the world.

The 28-year-old Glasgow prop is making his first start for Scotland since the 2011 World Cup warm-up international against Italy.

"We know they are a big, physical team; all 15 of them," he said. "But we pride ourselves in the same kind of areas, so it should be a good battle on Sunday.

"In my position, physicality is our bread and butter and it's something I thrive on.

"I just need to get stuck in. It's a great opportunity for me to show what I can do and I can take a lot of confidence from my club form."

South Africa name their team on Thursday and Low may be going up against Tendai Mtawarira; nicknamed 'The Beast'.

"He's got a bit of reputation and rightly so," Low said of the Natal Sharks loosehead.

"He's destroyed scrums and given a lot of tightheads a lot of bother. He has been very impressive.

"You have to stick to what you know and work hard on what we've prepared in the set-piece."