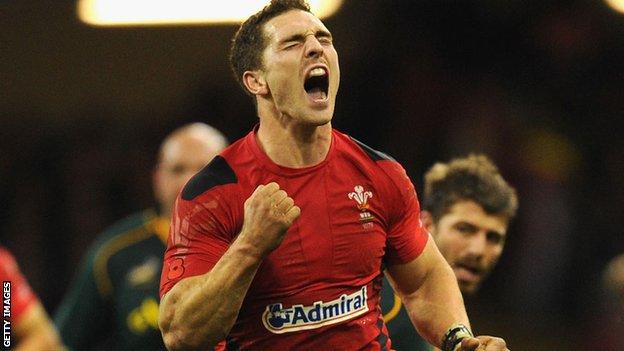 Wales wing George North has been told to find the form which made him such a threat for the British and Irish Lions.

Rob Howley, the Wales attack coach, has ruled out moving North to centre to replace the injured Jonathan Davies against Argentina on Saturday.

He wants North to focus on his role on the wing for Wales after his display in the 24-15 defeat to South Africa.

"George needs to get back to where he was last year and on the summer tour," said Howley.

George needs to get involved, in terms of his work rate. We showed him clips of himself when he made his debut against South Africa and he made 20-odd touches, he only made seven on the weekend.

"I was a bit disappointed with his performance in terms of number of touches.

"We talk about regeneration and getting involved in the game and he just fell short.

"We have spoken about it, both of us, and it's important he plays on the wing on the weekend.

"He needs to get involved, in terms of his work rate. We showed him clips of himself when he made his debut against South Africa and he made 20-odd touches, he only made seven on the weekend."

Warren Gatland, the Wales coach, does face the prospect of having to find replacements to face the Pumas, with Ospreys prop Adam Jones (calf) and centre Davies (chest) both ruled out for the rest of the autumn internationals.

Wales are also waiting on the fitness on Scarlets wing Liam Williams who took a bang to the head against South Africa and is expected to train on Thursday.

Gatland has called up Scarlets props Samson Lee and Rhodri Jones and Dragons backs Hallam Amos and Tom Prydie to train with Wales this week.

Rhodri Jones, 21, could be the surprise selection to replace Lions prop Adam Jones at tight-head.

The Scarlets player has played twice for Wales before, against the Barbarians in 2012 and on the 2013 tour of Japan.

While Howley rules out the prospect of switching North to centre, it does mean Wales have to find a replacement to partner Scott Williams in midfield.

Ospreys centre Ashley Beck is in pole position having replaced Davies on the 13th minute against the Springboks.

However, speculation is growing that Cardiff Blues centre Cory Allen could be a surprise selection alongside Williams.

Allen, 20, has played fewer than a dozen games for the Blues, but has been an impressive player on the international seven circuit.

"They are all in contention," said Howley.

"In James Hook, Cory Allen, Ashley Beck, Scott Williams, we feel we have strength in depth."

But Howley has revealed that Wales have ruled out the possibility of Hook starting at full-back and moving Halfpenny to the wing, where they finished playing against the Boks.

"We believe Leigh Halfpenny is one of the best full backs in world rugby," said Howley.

Meanwhile, prop Gethin Jenkins is expected to win his 100th Wales cap when he runs out against the Pumas on Saturday.

The British and Irish Lions loose-head joins Gareth Thomas, Stephen Jones and Martyn Williams as the fourth player to win a century of caps for Wales.