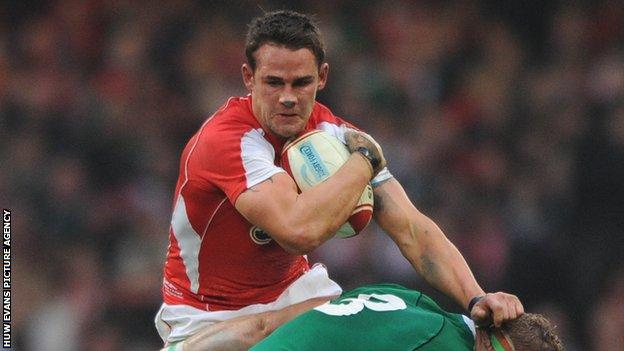 Lee Byrne says he felt his Wales career was over "a year or two ago".

"It's not looking good is it at the moment? I probably thought it was over a while ago, so it's not much of a disappointment any more," said Byrne, a 2009 British and Irish Lion.

"I've probably got over that raw disappointment a year or two ago."

Byrne was recalled to the Wales squad for the 2013 Six Nations when Robert Howley deputised as head coach with Warren Gatland leading the Lions to Australia.

However, the former Scarlets and Ospreys star did not play as Wales successfully retained their title.

Since then Byrne admits that there has been no contact with the Wales management, although he stressed that he would be happy to join up with the national squad if he was asked.

Wales in their in their opening autumn Test, including to backs Jonathan Davies and Liam Williams and the ranks have been filled by Dragons pair Hallam Amos and Tom Prydie.

Argentina are their next opponents at the Millennium Stadium on Saturday, followed by matches against Tonga and Australia.

"They must have lost my number, no one has been in touch," Byrne added.

"I'm disappointed obviously. I know my own ability and I know I'm good enough to be there.

"But it's not the end of the world; I've got my club rugby over here to concentrate on and the Heineken Cup, so you just move on from it."

Byrne will be joined at Clermont next season by compatriot Davies, who has

"It's massive for the club and... I know everyone is excited about having him over here and rightly so," Byrne said.

"He's a world-class player and he's going to be a massive addition to the squad.

"It's a great club with a great support base and I'm sure he'll love it here... running out in front of 20,000 every week is special as well, it's what you want to do as a player."