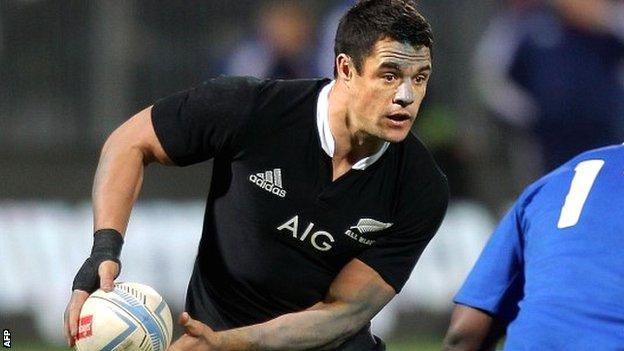 Fly-half Dan Carter will become the fifth All Black to win 100 caps after being named in the New Zealand starting XV to face England on Saturday.

He follows Richie McCaw, Keven Mealamu, Tony Woodcock and Mils Muliaina in reaching 100 caps for the All Blacks.

"Dan's one of the special, special ones. He's well deserving of the honour," said head coach Steve Hansen.

Winger Julian Savea comes in to face England, the only change from the team that beat France 26-19 last weekend.

Savea missed that victory with illness but returns on the left wing, with Charles Piutau switching to the right and Cory Jane, who started his first Test of the year in Paris after a knee injury, dropping out of the match-day squad.

What they say about Carter

"He is one of the greats. His form for the last 10 years has been quite phenomenal. He has been one of the most influential players in world rugby, no question. (Ex-NZ captain Sean Fitzpatrick)

"He is probably the best All Blacks number 10. He has everything with his defence, his attack, and kicking skills. He is a wonderful player but I would still just nudge Jonny Wilkinson ahead of him if I had to pick between the two. (Former England coach Sir Clive Woodward)

Among the replacements, lock Luke Romano comes in for back-rower Sam Cane to strengthen the All Blacks' second-row options.

The All Blacks have won all 12 Tests so far this season and are seeking to become the first side in the professional era (since 1995) to win all their matches in a calendar year, with their final Test against Ireland in Dublin a week on Sunday.

New Zealand went unbeaten in 1997, only a 26-26 draw at Twickenham denying them a 100% record from their 12 Tests that year, while Ireland also remained unbeaten in 10 Tests in 2009, which included a draw against Australia.

New Zealand, the highest-ranked Test team for the past four years, will be looking to make amends for last year's 38-21 defeat at Twickenham, their only loss in 33 matches since the beginning of the 2011 World Cup.

But Hansen insists revenge is not the All Blacks' primary motivation.

"A lot of people have bandied the word revenge around; I reckon that's one of the silliest word you can ever use in rugby," he added. "It's too strong a word. Revenge is quite a hateful word, and our game is a beautiful game.

"What it is is an opportunity to see if we have actually improved, to see if we are good enough to beat England. We weren't last time. They were first, daylight was second and we were third. No excuses, we were beaten by a side who played way better on the day.

"I'd rather see it as an opportunity rather than use the word revenge."