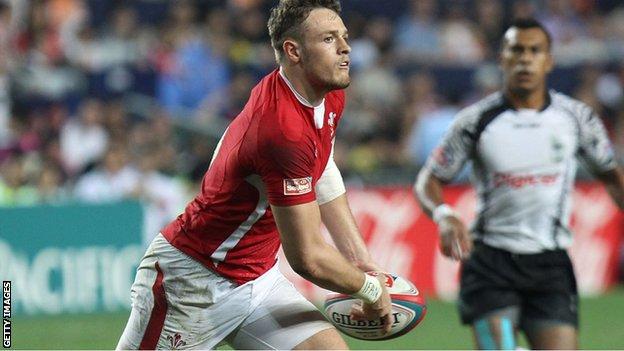 Allen, 20, is being tipped to take the place of injured British and Lions star Jonathan Davies.

We showed [George North] clips of himself on his debut against South Africa and he made 20-odd touches. He only made seven on the weekend

Scarlets prop Rhodri Jones may play tight-head prop in place of another Lions star, Adam Jones, who was also hurt in the 24-15 defeat by South Africa on Saturday.

The injuries to Davies (chest) and Jones (calf) mean that changes in the midfield and front row are inevitable.

And Gatland could also make a change at half-back, with Dan Biggar poised to return at fly-half after missing out to Rhys Priestland against the Springboks.

There is unlikely to be a place in the starting line-up for James Hook, although the Perpignan back could be on the bench as cover for midfield and full-back.

Allen has played only 10 senior matches for the Blues, but his size and pace have made him an important figure in the Wales sevens set-up.

George North will continue on the wing, despite calls for the Lions star to be moved to centre.

Rob Howley, the Wales attack coach, ruled out a switch, saying he wants North to focus on his role on the wing.

"George needs to get back to where he was last year and on the summer tour," said Howley. "I was a bit disappointed with his performance in terms of number of touches.

"We talk about regeneration and getting involved in the game, and he just fell short. We have spoken about it, both of us, and it's important he plays on the wing on the weekend.

"He needs to get involved, in terms of his work rate. We showed him clips of himself when he made his debut against South Africa and he made 20-odd touches. He only made seven on the weekend."

Meanwhile, prop Gethin Jenkins is expected to win his 100th Wales cap when he runs out against the Pumas on Saturday.

The British and Irish Lions loose-head joins Gareth Thomas, Stephen Jones and Martyn Williams as players with a century of caps for Wales.