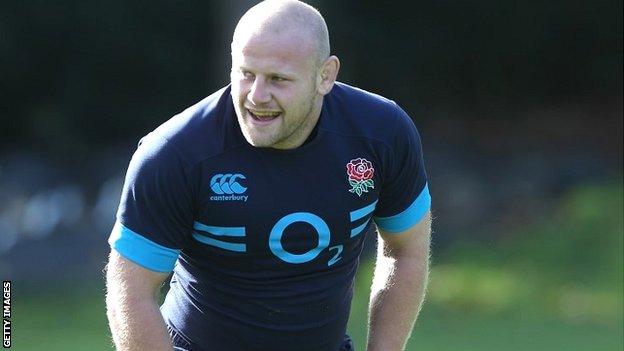 England have made one change to their team for Saturday's match against world champions New Zealand at Twickenham.

British and Irish Lion Dan Cole starts at tight-head prop in place of David Wilson, who drops to the bench.

Last year's win against them didn't just happen - it was a lot of hard work, a lot of fighting spirit

Wasps prop Matt Mullan is among the replacements and could win his second cap, while scrum-half Ben Youngs replaces Danny Care on the bench.

Only seven of the team started the surprise 38-21 win over the All Blacks at Twickenham in December last year.

Corbisiero, who missed a chunk of last season with an injury to his right leg, before recovering in time to tour with first England and then join the Lions in Australia, is set to undergo an operation to 'tidy up' cartilage in his left knee. As yet his club Northampton do not know when he might return to action.

"We have two Lions props that are not available," said Lancaster. "But it's a great opportunity to look at other players and test them against the best side in the world. I'm confident they will deliver."

Cole, who started the opening autumn Test against Australia, is recalled to the team after dropping to the bench against Argentina.

Lancaster explained: "We want Dan's experience to start but I'm delighted with David Wilson's contribution this season, especially his ball-carrying, and I'm sure he'll make an impact later in the game."

Cole's fellow front-rower Hartley, 27, reaches his milestone against the country of his birth.

Lancaster hopes the Twickenham crowd can recreate the atmosphere of last year's victory against the world champions.

"They will have huge motivation to beat us after last year but you have to believe you can win going into any game and this one is no exception," added Lancaster.

"They have a great two-sided attack and a fantastic kicking game. Their ability to contest the ball aerially is exceptional. They play in the right areas and they have threats all over the pitch.

"We recognise the work our back three will probably have to do but we also have to put our game on them. We have put pressure on teams in the past. We made Australia struggle for decent front-foot ball."

Captain Chris Robshaw is fully aware of the threat posed by the All Blacks, who are seeking to become the first side since the professional era began in 1995 to win every match in a calendar year.

Their defeat by England last year ended a 20-match unbeaten run and Robshaw said: "New Zealand have been waiting 12 months for this opportunity. We were the only team to beat them last year so I've no doubt they'll want to beat us now.

"Last year's win against them didn't just happen. It was a lot of hard work, a lot of backs against the wall stuff, a lot of fighting spirit. We need to make sure we emulate that."

New Zealand fly-half Dan Carter, 31, will become the fifth All Black to win 100 caps after he was named in the starting XV for Saturday's fixture.