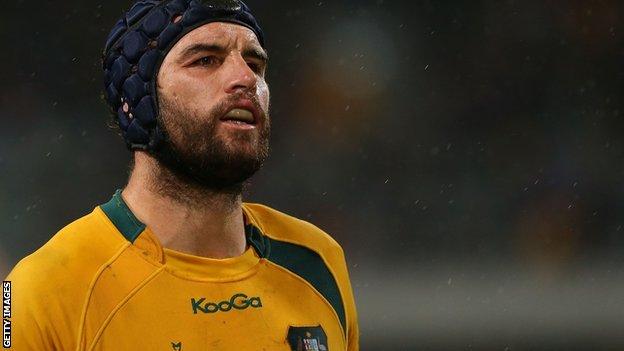 Australia have called up prop Sekope Kepu in place of the rested Ben Alexander and recalled flanker Scott Fardy for Saturday's game with Ireland.

Fardy's return means that Rob Simmons, who played at flanker in the 50-20 victory over Italy last week, returns to his normal place in the second row.

Sitaleki Timani is named as a replacement, while Paddy Ryan could win his second cap from the bench.

Returning hooker Tatafu Polota-Nau will also take his place on the bench.

The number two, a major threat with ball in hand in the loose, has missed the entire international season with a broken arm and a hamstring injury.

Tight-head prop Alexander is being given a rest on doctor's orders and his absence allows New South Wales Waratah Ryan the prospect of potentially winning his second cap.

Having the abrasive Fardy back on the flank, as well as Timani and Polota-Nau to inject from the bench, will be a boost for the Wallabies for what coach Ewen McKenzie expects to be a tough encounter with the Irish in the tackle area.

"The breakdown is always a key area to any game, but Ireland has been especially vocal this week on the importance they are placing on attacking us there," McKenzie said.

"It will be important for us to be extremely accurate at the breakdown, but overall we've gone with a forward pack that is quite capable of dominating in that area, especially with one of our best operators in Scott Fardy coming back from injury.

"We'll be looking forward to the challenge and also to the opportunity of building some momentum by winning back-to-back games for the first time this year."

Australia, who lost 20-13 to England at Twickenham two weeks ago, have named an unchanged backline following their convincing win over the Italians.

Last week's victory in Turin was only the fourth of the year for the Wallabies, who have lost two Tests to the British and Irish Lions, three to New Zealand, two to South Africa and once to England to open their November tour.

The breakdown was a key area of difference in the matches against the All Blacks and Springboks in particular.

McKenzie, who took over from Robbie Deans after the Lions series defeat, was delighted to name an unchanged backline for a third match in a row.

"They've been able to find the try line quite a bit over the past month and you can sense they are feeling more comfortable and confident in each other and how we want to play the game," he said.

"Still, we're under no illusion that these games are won up front, and we'll continue to have high expectations that our forwards will provide us with a strong platform from which to play from."