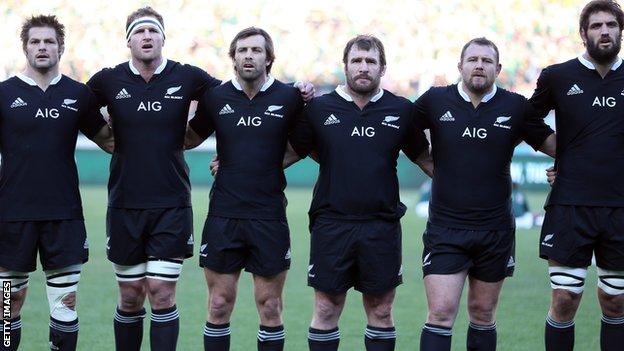 New Zealand return to face England at Twickenham on Saturday in familiar territory.

Top of the world rankings, as they have been for four years. Unbeaten in all Tests this year, as they were before their last visit to London.

That 38-21 defeat by England last December was the only blemish on a remarkable recent record. Since the start of the 2011 World Cup, they have won 31 of their 33 Tests, with one draw.

If they win at Twickenham, and again in Dublin a week on Sunday, they would become the first country in the professional era to emerge victorious from every Test in a calendar year.

It is a level of excellence that has seen many good judges acclaim them as possibly the finest All Blacks team of all time. England coach Stuart Lancaster called them

So how have the 2011 world champions stayed ahead of the game, to the extent that former captain Sean Fitzpatrick believes "the class of 2013 is better than 2012 and 2011"?

Less reliance on Carter and McCaw

Head coach Steve Hansen believes New Zealand have "matured as a team" over the past 12 months, and that process has occurred largely without their recognised talismen, Dan Carter and Richie McCaw.

New Zealand were only able to call on both players for one of their first 10 Tests of the year, and only three in all.

McCaw, on his return from a six-month sabbatical, has played in six of New Zealand's 12 Tests, Carter only five after first breaking his hand, and then suffering calf and shoulder injuries.

The latter's absence has given the talented Aaron Cruden, who has started six Tests, a chance to show New Zealand have more than one world-class fly-half.

Beauden Barrett, 22, has also added fresh dynamism off the bench, while in McCaw's absence, 21-year-old Sam Cane has looked like the great man's natural successor in the number seven shirt, whenever he is prepared to relinquish it.

While McCaw and Carter, who both start on Saturday, remain central influences, New Zealand are not short of on-field leaders.

And in number eight Kieran Read, the All Blacks have a player whose all-round skill set, work ethic and ability to influence matches at vital moments have made him McCaw's natural successor.

The 28-year-old has played the full 80 minutes in 11 of their 12 Tests this year, and provided continuity, consistency and leadership in McCaw's absence.

"A few years ago he was a really good player, but now he is world class," says Fitzpatrick, who led his country in 51 of his 93 Tests. "He is probably the most influential player in world rugby at the moment."

The All Blacks have always been deadly finishers, but this year their ability to create and seize try-scoring opportunities appears to have hit new heights.

In the recent Rugby Championship, which they won with a 100% record for the second straight year, they scored 24 tries in six matches, an increase of seven on the previous campaign.

"The finishing was out of the top drawer," noted another All Blacks legend, former number eight Zinzan Brooke.

"That last game against South Africa was unbelievable. It was something special. I was just clapping the whole time.

"You might be 12,000 miles away but in that moment you are so proud that you are a Kiwi and the machine still keeps pushing on and setting new boundaries."

New Zealand have been able to drip-feed new players into a winning side at opportune moments, giving it fresh impetus and sustenance at the halfway point in the four-yearly World Cup cycle.

Only 13 of the 36-man party currently touring Europe were part of the 2011 World Cup-winning squad, with new stars emerging all the time.

Charles Piutau, 22, is the latest off a seemingly endless production line of dazzling New Zealand wingers brimming with pace and panache.

On only his third Test start in Paris last Saturday, he proved himself a match-winner by scoring one try with a scintillating burst of speed and creating another for Read with a delightful flicked pass out the back of his hand, running at full pelt.

Another 22-year-old, blind-side flanker Steven Luatua, has also caught the eye with his powerful ball-carrying.

Scrum-half Aaron Smith has established himself as one of the world's best in only his second season of Test rugby, but perhaps the biggest revelation has been namesake Ben.

A relatively late developer, the 27-year-old was a full-back prior to this season whose greatest success had come in Sevens. He had started three Tests in three years.

This year he has re-emerged as first a prolific, side-stepping wing with an eye for a gap, starting all 12 Tests and scoring 11 tries including a record eight in the Championship.

Latterly, with another one of the team's leaders Conrad Smith taking a four-month sabbatical, his vision and awareness has been deployed at centre, cementing his status as an increasingly pivotal figure in the All Blacks backline.

Learning from your peers

In the environment cultivated under first Graham Henry and now Hansen, the coaches devolve much of the responsibility to the senior players, who set the example to the youngsters coming into the squad.

"That's the best coaching they can get," explains scrum coach Mike Cron. "To be honest we (the coaches) actually do limited coaching. We really encourage the leaders to lead, and we demand our senior players coach - or assist - our new boys.

"So when our senior players retire they can sit back and say 'we had a bit of an influence in the next crop coming through'. I think that's really important."

For the likes of lock Brodie Retallick, another who at 22 has come to the fore this season, it is a rich seam to mine.

"You come into a World Cup-winning team, they've got such high standards," he said. "Everyone wants to be the best they can so you have to get to their level pretty quick.

"I just try to get alongside them as much as I can - the way they see it is different to the way I was looking at it, so it's been a nice learning curve."

The quest for perfection

Expectation is one thing. The New Zealand public expects the team to win every match - "we feel as if we are shareholders in a great organisation, and the players know they are playing for the nation" explains Fitzpatrick - but success comes in different guises.

For the players and management, being number in one in the world is clearly not sufficient in itself. They may be the best, and increasingly viewed as perhaps the best ever, but that will not sate their constant desire for self-improvement.

"Let other people judge your performance," says Hansen. "We're just striving to be as good as we possibly can be and better than we are, which is number one.

"If you don't look to improve yourself you are going to go backwards. We are looking for perfect. There is no such thing as a perfect performance but that is what we strive to do."