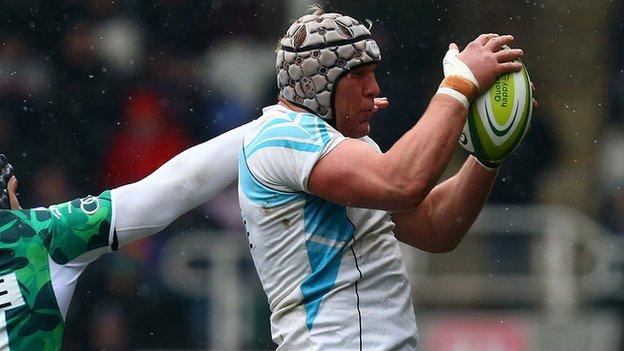 On his return after undergoing a summer bicep operation, Percival will partner Argentine Mariano Galarza in a new-look Warriors second row.

Galarza has been released by Argentina after appearing in their 31-12 defeat by England at Twickenham last Saturday.

But the Pumas have now called up back row forward Leonardo Senatore.

The Warriors number eight is now set to face Wales at the Millennium Stadium this Saturday.

New Worcester signing Andy Symons, who came off the bench in last Friday night's victory over Cardiff Blues, will make his home debut at Sixways, while winger Ravai Fatiaki returns from injury against a Leicester side including former Warriors favourite Miles Benjamin.

Worcester go into the game with confidence boosted by their first victory under Ryan, but they are keeping feet firmly on the ground, given that Cardiff's squad last weekend was missing 20 international players.

"We're not losing sight of the role the LV= Cup plays for us and everybody else," said Warriors director or rugby Dean Ryan.

"It will be a good test for us to see the youngsters again in a different light against tougher opposition.

"I'm sure Leicester will have a mix of youngsters and experience. Richard Cockerill has done a good job in the LV= Cup. He has always allowed his youngsters to play and stayed with them when they've been successful."