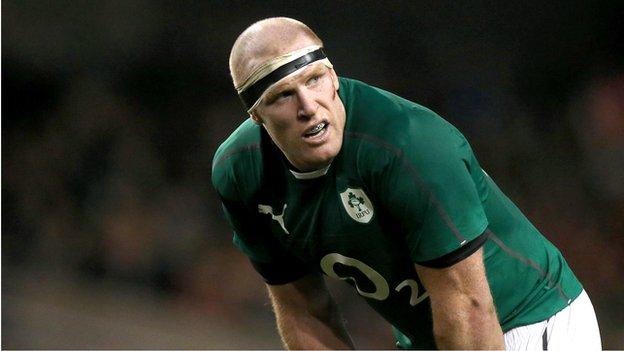 Ireland have made six changes to their starting line-up for Saturday's Test against Australia at the Aviva Stadium.

Skipper Paul O'Connell, Cian Healy and Sean O'Brien are named in the side after coming on as replacements in the 40-9 win over Samoa last weekend.

Fit-again Jonny Sexton replaces Paddy Jackson at fly-half, with Eoin Reddan coming in for Conor Murray at scrum-half for the clash with the Wallabies.

Ulster's Luke Marshall is preferred to Gordon D'Arcy at inside centre.

British and Irish Lions tourists O'Connell, Healy and O'Brien were all left out of coach Joe Schmidt's team to face the Samoans to give them extra time to overcome niggling injury worries which prevented them taking a full part in training ahead of the opening autumn international in Dublin.

Sexton was omitted from the match day squad for that game altogether as he was recovering from a hip injury following a hectic schedule of matches with his club, Racing Metro.

O'Connell was named as the new Irish skipper last week but Heaslip assumed the captain's armband for the first autumn international in the absence of the big Munster second row.

Ulster number 10 Jackson performed admirably in the victory over Samoa but was always likely to give way to Sexton, who has put in a series of consistent displays in the green shirt in recent seasons.

The inclusion of Leinster man Reddan at the expense of Munster's Murray, who also made the trip to Australia as part of the Lions squad in the summer, is more of a surprise however.

Meanwhile, the youthful exuberance of Marshall has been given the nod ahead of the more experienced D'Arcy as O'Driscoll's partner in midfield.

"Conor did well last week, as did Gordon, but we're coming at selection with an open mind, so it's about giving different people an opportunity," said Schmidt at the team announcement.

"This game offers Eoin and Luke an opportunity to put their hands up."

Tommy Bowe has shaken off a calf injury sustained against Samoa and takes his place in the back division.

Murray and Mike McCarthy offer experience on the replacements' bench, which also includes prop Jack McGrath, who impressed on his debut against Samoa.

Sean Cronin, Stephen Archer, Kevin McLaughlin, Ian Madigan and Robbie Henshaw complete the bench, with Madigan's versatility seeing him take his place in the 23 instead of Jackson.

Flanker Chris Henry has been ruled out of this game, and the following fixture against New Zealand, because of a hamstring injury.

Australia scored seven tries in Turin at the weekend as they came from 10-0 down to beat Italy 50-20.