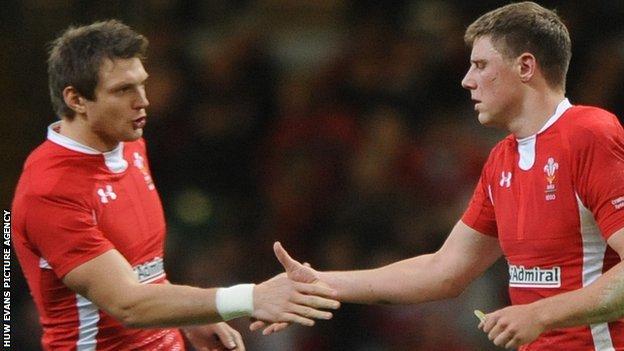 Coach Warren Gatland says Dan Biggar has his chance to stake a claim to the Wales fly-half spot against Australia on 30 November in Saturday's clash against Argentina.

Wales' autumn began in defeat by South Africa, and ends against the Wallabies with Tonga also to come on 22 November.

"The plan was to play one [of Biggar and Priestland] in the first game and one in the second," said Gatland.

James Hook will be on Perpignan duty when Wales face Australia.

Ahead of the series Gatland admitted to being frustrated by Hook's contract with the French Top 14 club because it does not allow the player full release for Wales' playing and training duties.

Gatland said Hook meant his contract was not as good as the deal wing George North has struck with Northampton which ensures the player is fully available to his country.

And with the Wales coach balancing the need for development ahead of the 2014 Six Nations with immediate success in the autumn, Hook is set to have his fly-half opportunity when they host Tonga on Friday, 22 November.

"Probably we will look at James Hook next week [against Tonga]," said Gatland.

Perpignan utility back Hook, 28, last started a Wales Test at centre as they lost 21-18 to Australia to take fourth place at the 2011 World Cup.

The 71-times-capped player has since made one other Wales start - against the Barbarians in June 2012.

Since then Hook has been largely used as a replacement, coming on at centre, wing and stand-off.

At the announcement of the Wales team to face Argentina on Saturday, 16 November, Gatland said: "With the 10 situation it was a tough call last week and we spoke to both the 10s and said that the plan was to play one in the first game and one in the second.

"And probably we will look at James Hook next week... and then make a decision for the Australian game."

Osprey Biggar helped Wales to the 2013 Six Nations title, but was the only member of the side that started the 30-3 clinching win over England not to be named in Gatland's subsequent British and Irish Lions tour party.

A year earlier Priestland was among the Wales players celebrating a Grand Slam.

Gatland praised Scarlets 10 Priestland for providing what he viewed as one of the attacking highlights of Wales' 24-15 defeat by the Springboks.

"For me the most exciting part of the game was Rhys Priestland running the ball from his own goal-line and having the vision to see that and get out there and to move the ball and if Leigh [Halfpenny] had got away… so we want to encourage the players to do that and have that confidence to go out there and express themselves."

Gatland also says Wales' clash with the Springboks will stand them in good stead for Argentina's forward-dominated threat in Cardiff.

"I think the hit-out last week will do us good," said the New Zealander.

"It was interesting talking to the referee [Alain Rolland] after the game, one of the most experienced referees in world rugby.

"He said he'd never refereed a game like that with the ferocity at the breakdown.

"And I think that goes a lot to say about how tough and physical it was.

"But we've had a hit out and we need to go out there and improve and the chances we create, we need to finish them off."