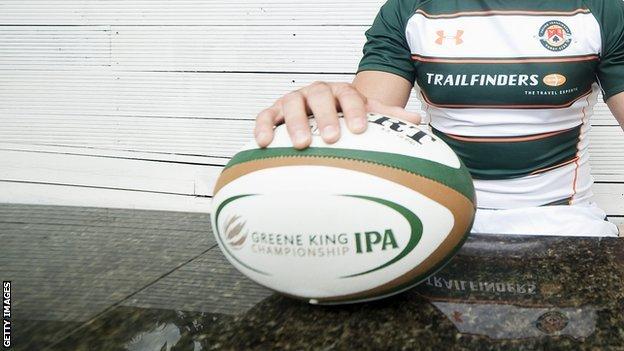 Ealing Trailfinders director of rugby Mike Cudmore admits promotion to the Championship has been a tough transition for the club.

After seven matches the west London based part-timers are bottom of the second tier with no wins.

"It's a huge step. We thought that after five or six games we should be up to the tempo of the league," he told BBC London 94.9.

"Perhaps it hasn't worked out how we expected it to."

Ealing won all but five of their league games in last season's promotion campaign from National One, scoring over a thousand points in the process.

We are getting close. We have put in some good performances. We need to keep believing and keep doing what we do

Despite their start to the Championship campaign, Cudmore believes the side can start winning matches soon.

"When we looked at the fixture list we had some tough early games, especially away from home," he said.

"I do feel that we are getting there. We need to get there quicker as we need points on the board.

"The problem isn't commitment - it's about being clinical. That's down to the ability of the people we are playing against - but also our inability to convert the pressure and the points."

This weekend Ealing travel to take on Championship leaders London Welsh, who have won all seven games so far and boast the meanest defence.

"We'll go into the game with what we believe is our best style of play," he said.

"We're going to focus on ourselves, defend for our lives, play with the ball and try and look after it a bit better this week.

"The most important thing is to go there, play with the best of our abilities, express ourselves, leave with no regrets and try to enjoy the day."

Next week Ealing host London Scottish, while Bristol and Leeds are also due to visit their Vallis Way home in the near future.

Cudmore believes that the Championship has become an even tougher division this season.

"I do think that there has been a gear change this year," he said. "The squads have vastly improved.

"It was always going to be tough for any team coming into the league.

"I don't think we were naive or caught out. You have got to be clinical - you can't afford to have 60 or 65% possession and not convert your chances.

"We are getting close. We need to keep believing and keep doing what we do."