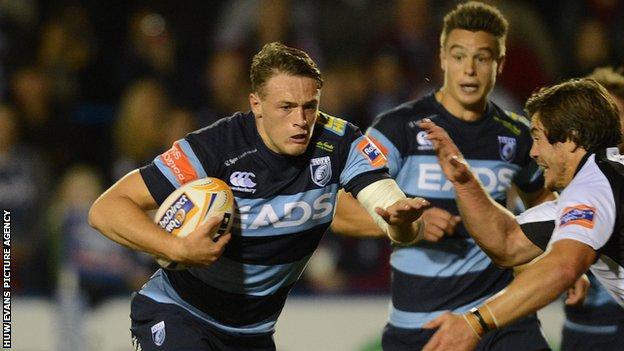 Cory Allen has signed a new three-year deal with Cardiff Blues that will extend his stay at the Arms Park until at least 2017.

The centre, 20, is in Saturday's autumn series Test against Argentina at Cardiff's Millennium Stadium.

"I'm a Cardiff boy and love playing my rugby here so I'm pleased to... commit my future to the Blues," Allen said.

"I've enjoyed being part of the first team set-up this season."

Allen, who has represented Wales at Under-18s, Under-20s and Sevens, made his Blues debut against Newcastle Falcons in the LV=Cup in October 2011 and has since made a total of 10 appearances for Blues.

"This season has got better and better for me. From getting my first start against Edinburgh to beating Toulon and now my involvement with Wales," added the Cardiff-born centre.

"It's been surreal how quickly everything has happened but you have to take your chances when they come.

"It's every young boy's dream to pull on the red jersey and play at the Millennium Stadium. All I can picture is singing the anthem and what it will mean and feel like.

"I was there last week for the South Africa game and I was pretty nervous then just watching. But it's all about taking opportunities and I want to take mine.

"It's been great to be part of the Wales set-up these last few weeks and I know all my team-mates will be supporting and backing me come kick-off against Argentina. It will be a special day."