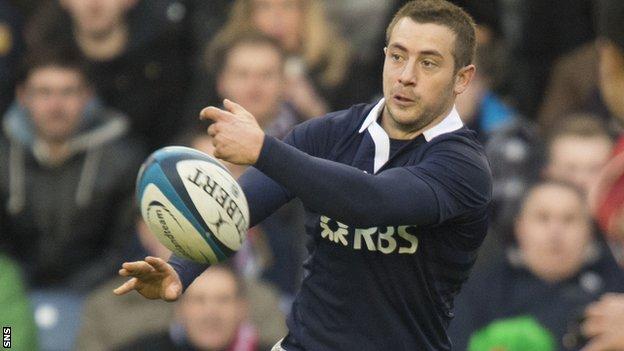 Scotland's Greig Laidlaw says standing in as captain on Sunday does not mean he is trying to take the role for good.

The Edinburgh scrum-half is skipper for the Test against South Africa instead of the resting Kelly Brown.

"Kelly is the current captain of this squad and I'm pretty laid back about the whole situation, so we will just see how it goes," said Laidlaw.

"It's something I'm excited about and I'm looking forward to the weekend. I won't take the responsibility lightly."

Interim head coach Scott Johnson has never confirmed Brown as his permanent captain, despite the Saracens flanker normally being his choice.

"I've spoken a lot with Kelly about captaining the side and he's been there for me this week, just like I'm there for him when he's captain," said Laidlaw.

I've spoken a lot with Kelly about captaining the side and he's been there for me this week, just like I'm there for him when he's captain

"I've got the honour of leading out Scotland. But he's an experienced guy and, if I've got anything I need to ask, he will be my first call."

The Murrayfield encounter will be Laidlaw's third match as captain after deputising for Brown during the summer clashes with the Springboks and Italy, but it will be his first on home soil.

Laidlaw, 28, started out on his path to international rugby as a boy in his home town of Jedburgh and admits Sunday's match will be the fulfilment of a long-held ambition.

"I captained the side twice in the summer, but it will be a lot bigger for me doing it in front of a packed house at Murrayfield," he said.

"Doing it here at home in Scotland is a huge occasion for me. It was always good memories for me coming to Murrayfield as a kid.

"I remember going up to the schoolboys enclosure with Jedburgh Minis.

"Did I ever expect all those years ago that I'd be leading a side out here? Well, you always want that to happen, but actually thinking that it will happen is a different thing.

"To realise this now is a special day for me and my family. But I can't get caught up in that occasion. We need to keep to our plan and be passionate at the same time to make sure we get the same result."

Laidlaw has faced the Springboks twice during his 22 outings as a Scotland player, losing 21-10 a year ago in Edinburgh, then coming close in Nelspruit in June before ultimately going down 30-17.

"We need to learn why we have fallen short a little in these last two games," he added.

"But we did compete with them during that game and, of course, that gives us confidence.

"We are capable of competing with these guys, but we need to do it more regularly and get across the line for a win.

"But we aren't underestimating the size of the challenge. South Africa are not ranked second in the world for nothing."