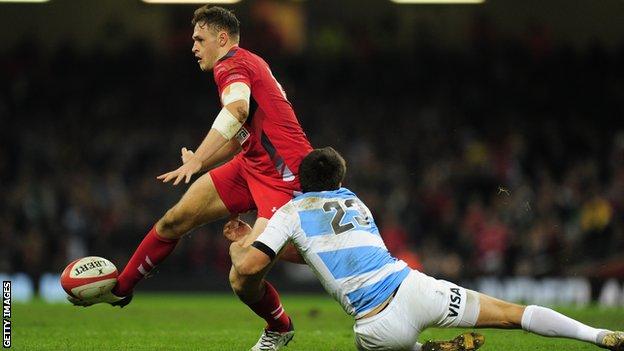 Wales' problems at centre deepened after both Cory Allen and Scott Williams were injured in Saturday's in Cardiff.

Allen made his debut against the Pumas but dislocated his shoulder and is out of the rest of the autumn series.

Williams suffered toe ligament damage and could miss Friday's game with Tonga but might possibly return against Australia on 30 November.

Davies suffered a torn pectoral muscle in last week's that is likely to also see the British and Irish Lions star miss that start of the Six Nations in February, while Roberts has a long-term ankle problem.

Lock Bradley Davies was also among the casualties against the Pumas and is another doubt to face Tonga.

"Looks like Cory has dislocated his shoulder and Bradley Davies has got a bit of a shoulder (injury) too," confirmed Wales coach Warren Gatland.

"Scott Williams may be a toe ligament, but hopefully it is not going to keep him out of next week.

"That doesn't look brilliant at this stage either. We have a few others sore from what was a physical encounter.

"That's sport and rugby, it's such a physical game and hopefully we are not too bad for next week."

Cardiff Blues centre Owen Williams is also struggling with a knock, leaving Osprey Ashley Beck as the only fit specialist centre in the Wales squad.

Perpignan's full-back James Hook has played in midfield for Wales before, while Dragons utility back Hallam Amos is another capable of filling in at centre.