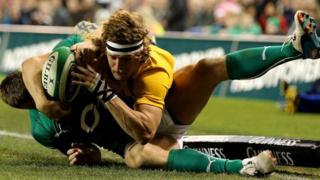 Tries from Nick Cummins and Quade Cooper and two from flanker Michael Hooper ensured the Wallabies left the Aviva Stadium with a win.

But the visitors ended the evening with 14 men after centre Tevita Kuridrani received a red card for a dangerous tackle on Peter O'Mahony.