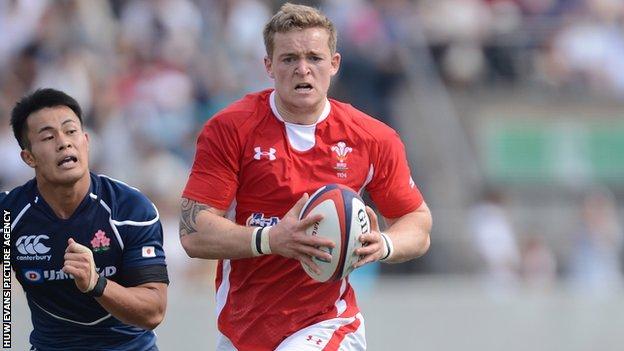 Wales have been boosted ahead of Friday's match against Tonga by centre Owen Williams' return to fitness.

Debutant Cory Allen joined British and Irish Lions Jonathan Davies and Jamie Roberts among the injured during Wales' 40-6 win over Argentina at the weekend.

Allen's fellow Blue Owen Williams could line up alongside Scarlet Scott Williams against the Sea Eagles.

Owen Williams has recovered from a hamstring strain and Scott Williams (toe ligament) hopes to be fit.

Allen suffered a dislocated shoulder against Argentina and is out of the rest of the autumn series, but twice-capped 22-year-old Owen Williams' availability eases Wales' injury problems at centre.

Scarlets centre Scott Williams' big toe ligament damage meant he left the Millennium Stadium with his foot in a protective boot on Saturday.

That seemed to leave Wales with only one fit centre in Osprey Ashley Beck, who came off the bench on the last two weekends.

"Hopefully, I will be back on the mend on Monday or Tuesday," said Scott Williams.

"It is precautionary more than anything.

Hopefully, we will ice the toe up and it will be alright. I will probably be strapped to the ice machine all night

"I have hurt my big toe and the boot is just to stop my toe from bending over in the next couple of days.

"Hopefully, we will ice it up and it will be alright. I will probably be strapped to the ice machine all night.

"Hopefully on Monday the knocks will not be as bad as they are now."

Davies suffered his injury in Wales opening that is likely to also see the Lions star miss the start of the Six Nations in February, while Roberts' problem is also long-term.

Perpignan's full-back James Hook has played in midfield for Wales before, while Dragons utility back Hallam Amos is another capable of filling in at centre.

Scott Williams has lost both his centre partners - Davies and Allen - to long-term injury in the last two Wales games.

"It is a little bit of bad luck for both of them really," said the Scarlet.

"I thought Cory was going really well up until the injury

"I am gutted for him obviously, but we have some good centres and hopefully Jamie [Roberts] will be back soon."