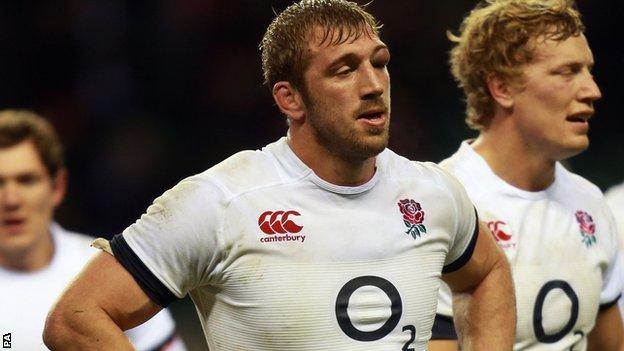 If defeat can never be viewed in a positive light by the participants in elite sport, it was possible amid the short-term pain of Saturday's loss to New Zealand to elicit the promise of long-term gain for England.

This autumn series may have ended on a slight downer in contrast to the dizzying high of beating the All Blacks a year ago, but head coach Stuart Lancaster was adamant progress has been achieved.

"We are definitely better than when met up four weeks ago," he said. "The players have worked hard to get to the level we expect of them. We can't allow those standards to slip now."

At the halfway point of their journey to the 2015 World Cup, England can take more sustenance from this performance than either of the two wins over Australia and Argentina that preceded it.

It was the first of five opportunities England have to gauge themselves against the world champions before they host the next global gathering in 2015, with a three-Test series in New Zealand in June 2014 to follow and a further Twickenham meeting next November.

So what conclusions can we draw from England's autumn statement, and what more do they need to add to their armoury to be genuine contenders two years hence?

England have a pack to be reckoned with

The success of England's great 2003 side was built on a formidable pack, and there are signs of the traditional ferocity and power associated with red rose eights of yore starting to re-emerge.

Hooker Dylan Hartley provides a hard edge, and his leadership has seen him move ahead of Tom Youngs, whose struggle to replicate Hartley's line-out expertise proved costly on Saturday.

Lock Courtney Lawes finally looks like the Test player everyone assumed he would become after bursting onto the scene in 2009, while Joe Launchbury is building on the promise of his first season.

Flankers Tom Wood and captain Chris Robshaw are consistently effective, make few errors and hunt well in tandem, while number eight Billy Vunipola belied his tender years with another performance rich in promise. "At 21, he showed what a force he is going to be in world rugby," purred Lancaster.

For the next stage in his development, Vunipola could do worse than study New Zealand's Kieran Read, who despite picking up a yellow card, showed that he is the All Blacks' most influential forward with his deft handling, vision and ability to make and take a chance.

Competition for places is driving standards

The aim of every national coach approaching a World Cup is to build a squad with at least two players, preferably three, of genuine Test quality fighting for every spot.

Lock Geoff Parling was a Lions Test player in the summer, but now finds himself facing an uphill battle for a start in his own national side, such has been the growing authority of the fledgling partnership of Lawes - who has proved himself capable of calling the line-out - and Launchbury.

It is a similar story at hooker and at number eight - where a re-energised Ben Morgan will challenge Vunipola - and scrum-half, where Ben Youngs and Danny Care can be expected to keep the heat on Lee Dickson.

More power and guile in midfield

Of the six players who featured on the Lions tour of Australia and were unavailable to England on Saturday, Manu Tuilagi was the one sorely missed.

The Leicester centre's ability to breach the first line of defence and off-load out of the tackle gives England a strike weapon they have yet to find elsewhere.

Joel Tomkins, solid in his defensive chores, has done little in attack over the past three weeks to suggest he has a Test future of any great longevity.

Billy Twelvetrees, after a sticky start against Australia, progressed against Argentina and grew in confidence once more against New Zealand, showing footwork and power to create space.

Signs of a greater understanding with fly-half Owen Farrell are starting to emerge, but England still lacked the precision in their passing to build more fluency to their attacks.

Greater firepower on the flanks

If Mike Brown has nailed down the full-back berth for the foreseeable future - "it would be hard to argue there was a more consistent player in all three matches, he has been excellent," said Lancaster - England have lacked threat from wide positions this autumn.

Chris Ashton again gave the impression of a man desperately trying to find his long-lost mojo, and might have already lost his place but for injuries to Christian Wade and Marland Yarde.

Yarde enjoyed a promising start against Australia, and it is safe to assume both he and the electric Wade will be given their heads in the Six Nations, with Ben Foden also likely to make way.

Julian Savea, with his 17th and 18th tries in 19 Tests, and Charles Piutau oozed menace by comparison. New Zealand brought their two wingers into play at every opportunity, whether swiftly moving the ball wide to give them space to work in, or sending up inviting kicks for them to chase.

Whether England will ever be able to match the All Blacks' mastery of basic skills when it comes to creating and seizing a try-scoring chance is debatable.

"It was a compelling watch. There were 80,000 people here who will have been proud of England's performance today. Even when the game finished, people were on their feet applauding. When the All Blacks reflect on this game, they will be saying that England have done themselves a lot of favours because they played really well."

Considering they were under the pump for large parts of the second and third quarters, struggled to adapt at the breakdown where they conceded a series of penalties, and struggled for direction after Dan Carter's departure, New Zealand's ability to come up with the big play when it counts sets them apart.

The moment centre Ma'a Nonu sized up the impending impact from Lawes and Morgan but still had the dexterity to flick a delicious offload into the hands of the waiting Savea for the clinching try seemed beyond anything an England back might manage.

"These are things that happen every week so there is not that 'wow' factor," said All Blacks coach Steve Hansen. "He wasn't trying to do something under pressure without having done it before. It wasn't a new thing, it was just natural."

Ultimately, class prevailed at Twickenham. New Zealand captain Richie McCaw spoke of "winning more moments" when it counted. But England did enough to suggest they are catching up fast.