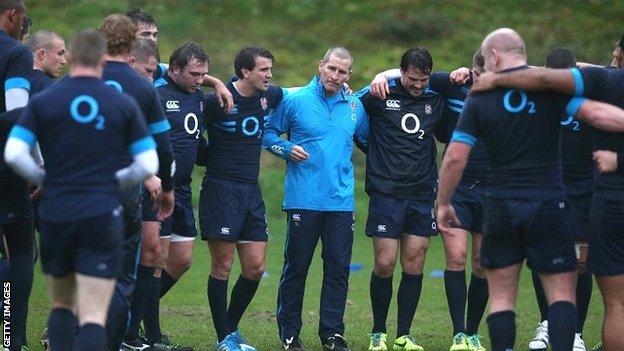 England coach Stuart Lancaster believes his team will cope with the expectation and pressures involved in the 2015 World Cup being played on home soil.

"I think we have created an environment where they can play with no fear," he told BBC Radio 5 live's Sportsweek.

"We know we've still got a long way to go but there's a good team developing.

"There is pressure, but the players are very, very good at dealing with it now, and hopefully collectively we can keep on moving forward."

England's three-match autumn international programme came to an end on Saturday with a 30-22 defeat by world champions New Zealand at Twickenham.

It ended a run of six successive victories at Twickenham for Lancaster's team and was only their second loss in 10 matches this year.

"I think we've got a very good culture now, a very good environment that the players enjoy," he said. "The players have pride in the shirt and I think people who come to Twickenham can see that in the performances, and hopefully people at home can see that as well."

The coach now turns his attentions to the Six Nations, which begins for England with a visit to France on 1 February.

Lancaster, who was appointed full-time coach in March 2012, hopes young players will emerge to create even greater competition for places in the coming months.

"There are definitely one or two out there who I'd like to create opportunities for and that's the challenge of the job, it's how you create those opportunities in the heat of the battle when it's about winning games as well.

"A couple of young players in the Premiership are very close to the team and hopefully the Six Nations will be the opportunity for them to put their marker down."

England jointly hosted the 1991 World Cup tournament and reached the final, losing 12-6 to Australia at Twickenham, and the current coach is relishing the task of guiding the team to the highest levels again.

"I wanted to do the job because I wanted to try to make a difference. It's the best job in the world for me, coaching talented young English players who want to play for their country, who want to wear the shirt with pride and play in big games," he said.

Asked about Saturday's defeat by the All Blacks, he added: "Of course you want to win every game but we've won nine of our last 11 and I think we've made great progress a very good culture now that the players enjoy.

"Twickenham was an unbelievable occasion, a sporting occasion I'd have paid to go and watch myself and I'm sat in the middle of it.

"A lot of young players are enjoying the experience. When you get that enjoyment with no fear hopefully the sky's the limit and you can keep pushing them on."