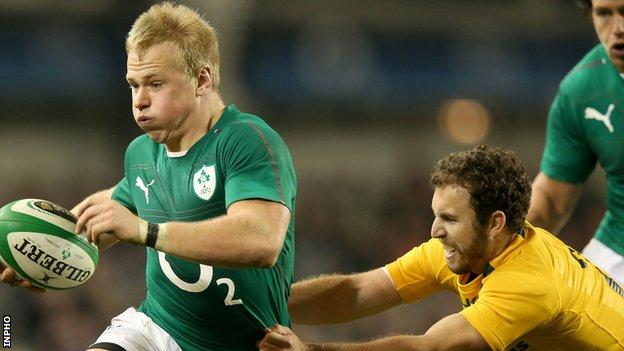 Marshall accepted the blame for missing a tackle on the Wallabies fly-half, gifting the visitors the try.

However, the 22-year-old said he had received the backing of coach Joe Schmidt after the 32-15 Dublin defeat.

"When you make mistakes, you've just got to put your hand up and get on with it - and learn from it," said Marshall.

Who is Luke Marshall?

"Joe came over to me straight afterwards in the changing rooms and said I just have to move on.

"It is Test rugby, it is one of those things that happens. One mistake sometimes leads to a try.

"I appreciated him coming over, he did understand, and it is nice to have that backing.

"It has given me a lot of confidence for him to give me that opportunity. The challenge of course is to take that forward now."

The third-try error aside, Marshall had a decent game, making a number of line breaks.

"I suppose I was happy enough, but there is a still a lot to work on," he added.

New boss Schmidt refused to lambast four-cap Marshall for missing the routine tackle on Cooper that saw Ireland concede the first score of the second half.

"Individual players still have a lot to learn," he said.

"When Cooper danced through, there are some things that need to be learned there, because we were really well matched up.

"But you cannot account for a guy who is still really young and still learning, and I think that was pretty evident if you look at it again.

Sexton limped out of Saturday's match with a hamstring problem and an update on his injury should be issued on Monday.

In Sexton's absence, the number 10 shirt would go to Jackson or Leinster's Ian Madigan.

Jackson started for the win over Samoa, while Madigan was Sexton's half-time replacement in the Australia match.