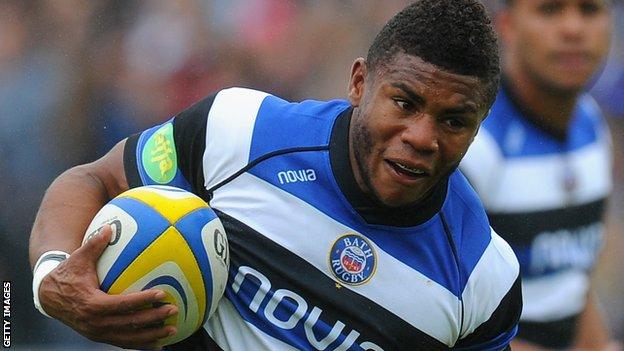 Bath head coach Mike Ford has insisted the club has moved on from the incident involving Kyle Eastmond at Sale.

It was reported the 24-year-old ex-St Helens player walked out at half-time in the win at the Sharks on 8 November and wanted a return to rugby league.

Bath issued a statement playing down the claim he wanted to switch codes.

Everyone has been asking about Bath's backs this year, but it's very difficult to play in the weather conditions

"It's all done and dusted. What happened on Friday night is all put behind us," said Ford after the 37-15 win over Exeter in the LV= Cup.

"We've spoken to Kyle a few times, he came to the game and will be back in training tomorrow and he will be up for selection at the weekend."

After their last-gasp 27-20 win at the Sharks, Bath again were impressive as Matt Banahan, Matt Garvey, Martin Roberts and Charlie Beech all crossed in the bonus-point win over the Chiefs.

The victory was Bath's sixth consecutive win in all competitions, but Ford believes there is still more to come.

"We were clinical and professional. Exeter are a very, very good side and we didn't give them many opportunities to play," he told BBC Radio Bristol.

"I was really pleased with the attack and you saw snippets of what we can do.

"Everyone has been asking about Bath's backs this year, but it's very difficult to play in the weather conditions that they have done, so it was good to have a dry day."