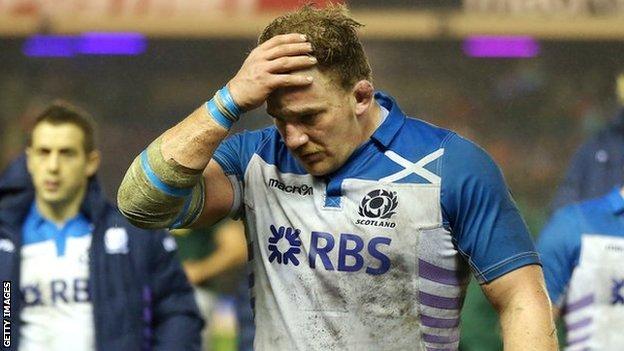 Scotland's Moray Low and Tommy Seymour are major concerns for Saturday's match against Australia after 11 players were left nursing injuries following the loss to South Africa.

Winger Seymour has a calf injury and prop Low a shoulder problem and will require further medical treatment.

The Scottish Rugby Union reported that another seven squad members were also being treated by Dr James Robson and physiotherapists Paul McGinley and Stephen Mutch for lesser ailments following the 28-0 defeat by the powerful Springboks.

Dr Robson said: "Considering the physicality of yesterday's game, our initial examination this lunchtime would suggest that the overall squad are in better physical health than might have been expected."

It is too early to say whether any of the injured players will be sidelined as Scotland complete their series of autumn Tests on Saturday, when Australia visit Murrayfield.

Prop Euan Murray will be available again after missing Sunday's encounter due to his religious beliefs.

Scott Johnson's side opened with a victory over Japan before losing the second of the three matches in Edinburgh to the side ranked second in the world.

The Wallabies are seeking a third straight tour win having won in Italy and Ireland after a defeat by England at Twickenham.

However, they arrive in Scotland with a much-depleted squad after suspending six players for a drinking session before Saturday's win over Ireland.

Prop Paddy Ryan will serve his one-match ban when Australia complete their own autumn series in Wales on 1 December.

His suspension is delayed because International Rugby Board regulations state that a team's 23-man match squad must contain four props.