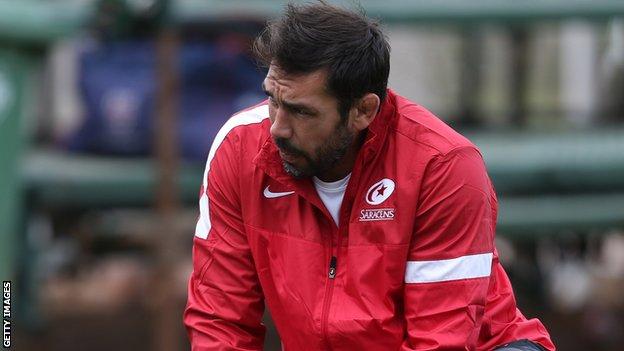 Saracens forwards coach Alex Sanderson says the players have set themselves the target of winning the LV= Cup.

The Allianz Park outfit beat Scarlets 51-10 on Sunday to cement their place at the top of Pool 1.

Sanderson told BBC London 94.9: "In recent years it has been an opportunity to blood some of the younger kids and rest some of the senior players.

There were some really good performances by young players. It is exciting for the future as you know you have these players waiting in the wings

"We see this cup as not something where we want to give people opportunities. We want to win it."

The 34-year-old added: "Most of the players we have now are proven, either through second-team rugby or Premiership.

"We said to the boys if it is not about getting opportunities, as we believe you are all god enough, then what is it about?

"It was them who said 'we are going to win this thing'.

"The performance of the first two games have proved it; two games, two bonus points and 10 points on the table."

Saracens have not won the competition since it was expanded to include both English and Welsh teams in the 2005-06 season.

Meanwhile Sanderson, who took up coaching in 2005 after being forced to retire through injury, says the LV= Cup provides a platform for the younger members of their squad to stake a claim for more regular action.

"You have these players who are emerging alongside some very experienced players," he said.

"Some of these young guys, and those who are new to our system, have put their hands up in terms of selection, even when the internationals come back.

"I am happy for them as players as they want to play on a weekly basis, not just when the LV= Cup comes around.

"There were some really good performances by young players. It is exciting for the future as you know you have these players waiting in the wings."