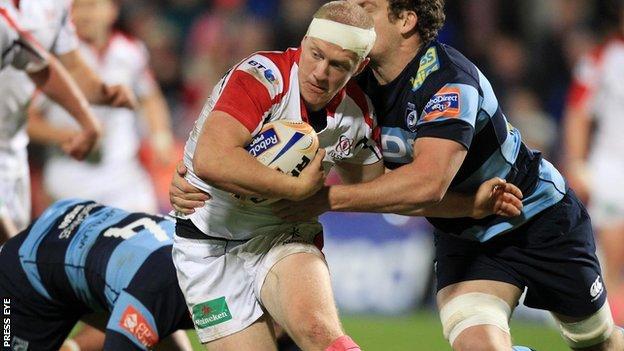 Ulster utility back Stuart Olding is set to miss the rest of the season after suffering a serious knee injury.

The 20-year-old sustained a ruptured anterior cruciate ligament while playing for the Ulster Ravens against Connacht A at Deramore on Friday night.

The versatile Ireland international played at fly-half in a 35-10 victory.

Olding has played at full-back and centre for Ulster this season and won his first Irish cap against the USA in June.

The back is understood to have undergone an MRI scan on Saturday and the injury was further assessed on Monday.

Olding, rated as one of the brightest young prospects in Irish rugby, put in an impressive display in his first appearance at full-back in the recent Pro12 win over Cardiff Blues in Belfast.

Meanwhile Ulster coach Mark Anscombe faces a potential problem at scrum-half as he aims to find a back-up to Paul Marshall for the clash with Edinburgh at Ravenhill on Friday.

Ruan Pienaar is on international duty with South Africa, while Michael Heaney and Ian Porter are both understood to be carrying injuries.

Anscombe must also plan without a number of players who will be with the Ireland squad ahead of Sunday's final autumn fixture against the All Blacks.

Iain Henderson is likely to miss the game as he continues his recovery from toe ligament damage.