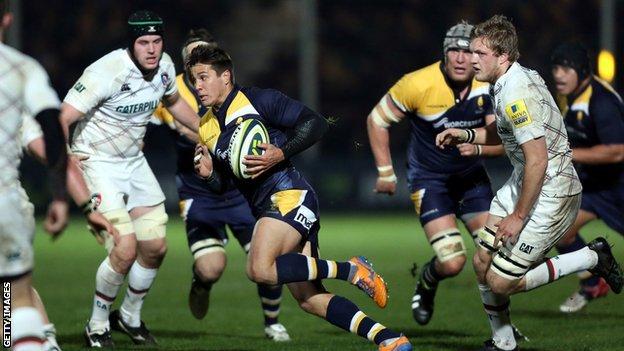 But for an off night with the boot for Paul Warwick and new signing Andy Symons, the Warriors, who have not won in the Premiership since 1 March, might have claimed their second straight win.

Warriors' woes in the Premiership

"If we'd got our kicks we'd have been out of sight," admitted Ryan.

"But that would take away from what a great couple of weeks it has been."

Ryan continued: "I thought some of our young players were outstanding.

"There are some issues with going back into the Premiership but they've given us a real shot in the arm."

Coming on the back of the 21-16 win in their LV=Cup opener at Cardiff a week earlier, first-half tries from Symons and Jake Abbott helped Worcester to a half-time 10-9 lead - the Tigers having stayed in the game with two penalties and a drop goal from Owen Williams.

But the sin-binning of Worcester flanker Sam Betty was the game's turning point, allowing the Tigers, badly weakened by international calls, to grow in confidence.

They scored two tries as they dominated after the interval, from Michael Noone and a penalty try, Worcester replying with a late try from Christian Scotland-Williamson and a Warwick penalty, their only successful kick.

"We were always going to give Andy a shot at kicking so I'm not overly worried about that," added Ryan, the Warriors' director of coaching.

"I didn't want to go straight into a Premiership game and say 'Andy, here you go'.

"But kicking has been an issue for us.

"We should have been stronger with our regular kickers and should not have been in that position."

Worcester return to Premiership action at Sale on Friday night when, having lost all seven league matches under Ryan this season, the Warriors will be looking to avoid a 13th straight defeat.