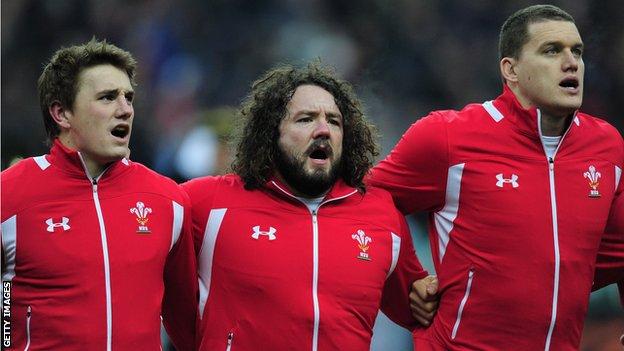 Wales lock Ian Evans expects to make a decision over whether or not to leave the Ospreys in January.

The 2013 Lion could become the latest leading player to move away from Wales, with Jonathan Davies recently moving to Clermont Auvergne.

Both table-topping Toulon and Saracens have been linked with 29-year-old Evans, who has been capped 30 times.

"There have been offers from England and France. There is a lot on the table, but it is not really a distraction.

"But I've got a family on the way and first and foremost that is what I am looking after."

Evans' Ospreys team-mate, prop Adam Jones, has said he would consider joining the exodus of Welsh players playing in France.

Lock Luke Charteris and fly-half James Hook are at Perpignan, flanker Dan Lydiate and centre Jamie Roberts are at Racing Metro, while George North left Scarlets for Northampton ahead of the current campaign.

Evans' fellow Ospreys, Wales and Lions lock Alun Wyn Jones is also out of contract at the end of the 2013-14 season and could leave.

The Welsh region's chief executive, Andrew Hore, admitted in August that the region could find it hard to keep hold of some of their Lions stars.

However, Evans has also concerns of a more immediate nature.

The first is to make an impression for Wales, if selected, against Tonga at Millennium Stadium on Friday in the hope that an appearance against Australia at the same venue on 30 November would follow.

But the impending birth of his first child prompted the 6ft 8in, 18st 4lb player to admit if there are signs of a Friday evening labour, he would remove himself from Wales duty.

"I think you would probably see me doing a sharp exit through the tunnel, I think!" he said.

"She [Evans' wife] has been very understanding, to be fair.

"She has been fully supportive in everything I wanted to do, but I don't think I've got a say in this one.

"It's a life-changing experience."

Bradley Davies, Alun Wyn Jones and Luke Charteris have appeared at lock this autumn and Evans says overhauling them in selection would demand an outstanding personal display on Friday.

"To be fair to Brad, Alun Wyn and Luke, all three of them have played extremely well," said Evans.

"If I want to play in the last autumn game I am going to have to pull all the stops out.

"All I can do is have a good game on Friday night and put my hand up and put my name in the hat for [Australia] selection.

"I did full training all of last week and I came through that unscathed, so I am feeling pretty confident.

"It has been very frustrating, but I've got a chance for a game of rugby, which is quite strange at the minute, but one I am looking forward to."