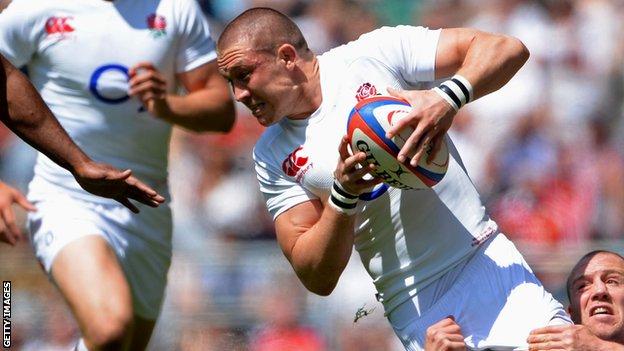 - Who England's standout player was during the autumn Tests

- Whether Australia were right to punish players over drinking

- The positive and negatives for Wales after Pumas win

- The international future of Brian O'Driscoll

Hi Jerry, in your opinion, who was England's man of the autumn series? I've been hugely impressed with Wasps lock Joe Launchbury - in my opinion his partnership with Northampton's Courtney Lawes in the second row has the potential to be one of the best in the world as the two players complement each other so well. Would you agree? Alex D

Hi Alex, I agree with you about the second row partnership. I thought it worked well and Lawes would be my most improved England player.

I thought the England pack in general outperformed the backs quite easily but full-back Mike Brown was the exception.

He had a very good series but wasn't supported well enough by the rest of the backs.

He stood out clearly for me as the best England back in the three games and would be my England player of the series.

Australia have banned six players for one game and reprimanded nine others after a midweek drinking session, where no bad behaviour was reported. They then won convincingly on Saturday. Overreaction by the coaches or the way the modern game is? Your thoughts please. Zippy

Hi Zippy, most teams have a code of ethics, which are generally worked out by the players and coaches.

I'm guessing these Aussie players broke their own code, or the rules put in place by the new Wallabies management.

Either way, if you get caught you deserve the ban. After all, you and your buddies put the code together.

Australia head coach Ewen McKenzie had to come down big otherwise he would have lost the respect of the squad.

If England, Wales and Australia played out their 2015 World Cup group now, who would go through and in what order? Nick Powell

Hi Nick, I believe Wales would be first, England second and Australia third, because I don't believe Australia have a pack strong enough to deal with either Wales or England at the moment.

However, if they have a decent pack by 2015 they will fly through because of their brilliant attacking backs.

Hi Jerry, after the autumn internationals which English players have cemented their place in the starting XV come the Six Nations? I would suggest Brown, Owen Farrell and the starting pack against the All Blacks have all done enough to retain their places. Rugbypete

Hi Rugbypete. Up front I believe hooker Dylan Hartley, second rows Lawes and Launchbury and flankers Wood and Robshaw should be automatic picks.

My loose-head prop would be Alex Corbisiero if fit, but if he is not then Mako Vunipola is next in line with Joe Marler, who stated on Saturday, as third choice.

At tight-head you can start either Dan Cole or David Wilson - there's not a lot of difference between them right now - and you have Geoff Parling backing up the second rows, while it's going to be a great contest between Billy Vunipola and Ben Morgan to keep the number eight jersey.

There's a lot of playing depth to the England forwards, plenty of good players that are well equipped to play international rugby- but it's a totally different situation in the backs.

Farrell and Brown are my only automatic three-quarter automatic picks, although I wouldn't ordinarily make Farrell first choice - it's just that he's playing better than the rest of the English 10s at the minute.

I just wish he would stand flatter to bring his backs more into the game. I believe number eight, left and right wing and both centre spots are up for grabs leading into the Six Nations.

How impressed have you been with England and Saracens number eight Billy Vunipola? For the 60 minutes he was on he always seemed to gain a few extra metres and he caused havoc for Richie McCaw and the rest on Saturday. Having said that Ben Morgan did bring impact off the bench, so it seems number eight is a strong position for England at the moment. ColinGLOS

Hi Colin, I totally agree, although it took Vunipola until this last game to really get up to speed in Test rugby and adjust to the step up in intensity of the international game.

If he keeps adjusting in the increments he has made so far, then in the next few games he really could start making the impact I would expect.

I want to see those really telling runs that we see the likes of New Zealand's Kieran Read and South Africa's Duane Vermeulen make in games.

Hi Jerry, Tom Youngs' line-out inability showed again on Saturday, at what point does his work in the loose become not worth the ineffective line-out? henno

Hi henno, as you know the line-out is so important to get right because it's a nailed-on requirement for a hooker to have a good throwing percentage - you're looking at an 80% to 100% success rate.

At the moment Hartley is 92% and Tom Youngs 89% in the Premiership this season, so it looks like Youngs may have just had an off day on Saturday.

Right now Hartley is producing the goods in the loose as well as outperforming Youngs in the line-out and looks to have nailed down the England hooker shirt, but Youngs would still make my squad he's the back-up at the moment.

Would you say that England have demonstrated this autumn that they will be the team to beat come the Six Nations? Rugbyman

Hi Rugbyman, at the moment I would say Wales, France and England will be the teams to beat this time round in the Six Nations, but I don't believe England should be anywhere near being odds-on favourites, not least because they have three away games, which makes it harder.

Jerry, what positives and what negatives would you take from Wales' record breaking 40-6 in over Argentina on Saturday? Gaz

Hi Gaz, I thought the attacking endeavour was good from Wales and that's a promising sign because a good team has to create opportunities and score tries from the chances constructed.

Leigh Halfpenny looked to be more involved from full-back and that's also a positive - it has to happen more because he's a great attacker and should be scoring tries.

On the debit side, two yellow cards isn't good - against better teams that's giving away a possible 14 points!

Jerry, after watching the Scotland v South Africa game I was very disappointed with the performance. I was particularly disappointed with Ruaridh Jackson at fly-half - both with ball in hand and kicking. Going into the Six Nations, would you be concerned about who will play 10 for Scotland? julian_c8439685983

Hi Julian, 10 has been a tough position for Scotland to nail down in recent times, no-one has put a real marker down to claim the shirt for his own.

Not one contender has shown consistently good leadership or command of either the position, backline or team - and at 10 you've got to stand out in a game.

The players themselves, the likes of Jackson, Tom Heathcote and Duncan Weir, have got to start producing performance they know they're capable of.

At 10 you get the ball a lot and make lots of calls and decisions. The priority has to be accuracy in execution of those decisions, and if you get those right you will be the best player.

I would be concerned for Scotland because there isn't currently a standout 10 demanding to be selected, it's definitely a position that's up for grabs.

What's your view on this being Ireland centre Brian O'Driscoll's last season, with his departure leaving a very sizeable gap in the centres with one year before the World Cup? Should he be dropped now so a new centre partnership can gel, or is the Irish Rugby Union scared of Keith Wood having another hissy fit? matthewschris

Hi matthewschris. A player wants to play as long as he can, but it's the coach who makes the selections - players would like to be the ones that say when it ends but it doesn't always happen like that.

I'm sure new Ireland boss Joe Schmidt, who coached O'Driscoll at Leinster, is a good enough coach to know when to bring new faces in, so I would trust his judgment.

It would be good for any new centres coming into the Ireland squad to train alongside BOD, it would be a real benefit to learn from his experience and class.

If there are centres deserving the position ahead of BOD, I believe Schmidt would be giving them game time right now.

England captain Chris Robshaw was sporting one hell of a shiner after the stunning encounter with the All Blacks on Saturday. What was the most bruising game you played in? simonw34

Hi Simon, I didn't really get too involved in those games, but I did watch a lot from my position on the field safely tucked away in the centres.