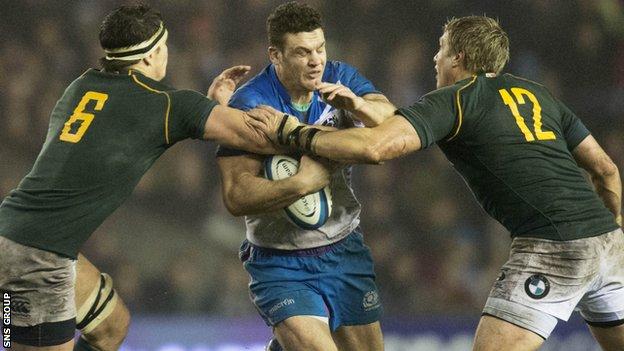 On the surface, there's not much to be positive about after the 28-0 loss to South Africa.

The negatives were certainly more obvious; 26 handling errors, a malfunctioning line-out and the unfortunate habit of doing all the hard work in defence, only for it to be undone with four "soft" tries.

Who can tell me which of the two teams had the better line-out statistics? Well, both sides had the same 71% success rate.

The problem with Scotland was the timing of their poor line-outs, with the vast majority of losses taking place in the first 20 minutes - when you're trying to get a foothold in the game and trying to take the momentum out of the constant waves of South African power.

And the reason for those first five or so going pear-shaped were varied; a steal with the first, a lack of concentration from Alasdair Strokosch at the second, a crooked throw from Ross Ford to follow. It was tough to watch.

Handling errors seemed to be contagious in the Scottish ranks. Jean de Villiers, South Africa's captain and defence leader, was utilising the 'one-out spot blitz' (coming out of line on the edge of the defensive line, forcing the ball carrier back inside or having to throw a long pass over the top) with great results.

In the wet conditions Scotland didn't have the speed of thought, attacking shape or execution of skill to manipulate this defensive strategy.

It should be noted that of the 26 turnovers, 15 of them were unforced errors - so the South African defensive press was not the only factor causing this problematic statistic. Most of them were basic individual errors, admittedly in very tough handling conditions.

At the start of the game, the Scots defended for over three minutes and were solid in shape, technically sound in the tackle and not over-committing at the breakdown. South Africa were going nowhere.

So why, 30 seconds later, were they under the posts? Because patience and discipline gave way.

Jim Hamilton, who'd had a poke at a few previous rucks, gave away a penalty for coming in from the side and taking the scrum-half out. Kick to corner and it was 7-0, after a clever shift drive.

Former All Black captain Todd Blackadder used to say that "it's all about the little things" and an example of this was the work of Bakkies Botha at the line-out which created the channel for the shift by driving Moray Low into the original maul.

These actions don't happen by accident. South Africa knew Scotland would come at them on that first defensive line-out. A simple change in point of attack negated this defensive onslaught. Brains and brawn.

If you were to ask most spectators, the vast majority would point to the first half-hour as the area of concern. But after 30 minutes and a woeful start, Scotland were putting together some nice phases, keeping the ball, challenging the edges and getting momentum. They had weathered the storm and frustrated their opposition - who must have felt incredibly disheartened to only have been 7-0 up - and were applying some pressure.

But Ruaridh Jackson popped the balloon by coughing up possession trying a miracle ball, and 10 seconds later Willie le Roux was scoring from an intercept. If you didn't think the game was over then, it was two minutes later, as Le Roux exposed a huge whole between Duncan Taylor and Alasdair Dickinson to put JP Pietersen in for the score straight from the kick off. 21-0.

Scotland had done the hard work in the first 30 minutes. They were just finding their feet when those two tries killed the game.

You don't want to gloss over the negatives, they need to be addressed - and I'm sure they will be - but Scotland don't have time to dwell on this performance as they have Australia to play after only a six-day turnaround.

There were positives in the game. As I've mentioned already, the fact that the score was only 7-0 after a fairly shambolic opening 30 minutes shows the resilience that the Scotland side have. The straightening out of the underperforming line-outs in the first 20 minutes showed adaptability and perseverance. The attacking kicks of Jackson (cross kicks) and Duncan Weir (angled grubber for Max Evans) showed the best defences can be unlocked with the boot.

With the exemption of some clever, attacking kicking options, I was disappointed that Scotland weren't boxing clever. They were hindered with the quality of ball but I would have liked to see a dummy drive and break out into the midfield or a peel around the tail of the line-out.

Scotland attack best when they play with tempo and do the unexpected - Sean Lamont's quick tap for example. These actions give the side impetus. Scotland needed someone to take the game by the scruff of the neck and impose themselves on South Africa, because you're not going to win an arm-wrestle against these behemoths.

During the game, someone sitting behind me (who was a glass half-empty kind of guy) said: "We're getting thumped and South Africa aren't even playing well." I don't agree with that.

South Africa are a pressure team who suffocate their opponents of possession, build their game on set-piece domination, physically hammer sides in attack and defence and take their chances when they are presented.

They simply played to their strengths, controlled the game and won comfortably.