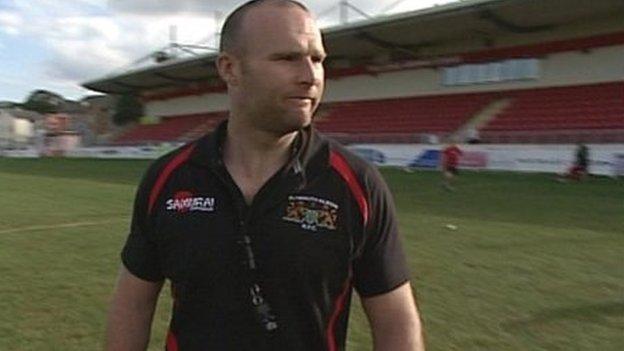 The visitors' scrum was penalised on several occasions, leading to three kicks at goal in the 15-10 defeat.

"I think it was poor officiating at scrum time which we didn't deal with," Shanahan told BBC Radio Devon.

"That was the difference between winning and losing, but we had enough ball and made enough chances to win."

Albion led 10-9 at half-time with centre Heath Stevens crossing for the only try of the game, while Matthew Jarvis added three penalties for the hosts.

"Our scrum plan was fine, it's just they were allowed to get away with certain things that they shouldn't have and it cost us," Shanahan continued.

"Out of seven scrum penalties I think four were very dubious, and we should have had a couple ourselves, but we didn't get those.

"Out of those four that were dubious there were nine points that were kicked."

Plymouth, who sit seventh in the table, failed to score in the second half as Jarvis put his side ahead with his fourth and fifth penalties of the afternoon.

"Nottingham was another game that got away from us - I'm very frustrated and disappointed with our performance," Shanahan added.

"We have to look at our accuracy and our skills before we go and blame everything on the officials, but they didn't help us."