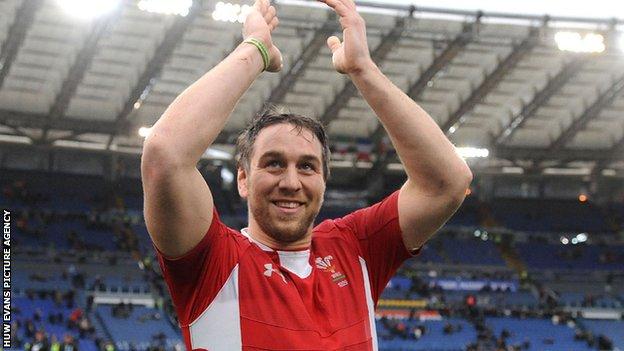 Ryan Jones says integrating the young players into the international game will be one of his key roles when he leads Wales against Tonga on Friday.

Number eight Jones wins his 75th cap against the Sea Eagles as he makes his first start of the autumn series.

He is one of 11 changes in a team which includes uncapped 19-year-old Dragons wing Hallam Amos.

- Ryan Jones on Warren Gatland, who will be in charge of an international team for the 100th time on Friday.

"For guys like me it's about facilitating those youngsters coming in," said Jones.

"It's obviously going to be very daunting coming in and playing your first international cap against a physical team like this.

"We've got to make sure that they're comfortable in what they're doing and allow them to function."

Jones has a wealth of experience to pass on to the younger players, having won Six Nations Grand Slams on three occasions.

And Friday's game will see the record-holding captain lead Wales for the 33rd time.

The game will also see first starts of the autumn for fly-half James Hook and unsettled Ospreys second-row Ian Evans.

However, Jones says none of the players will be putting their own performances ahead of the team effort.

"It's not about us going out there as 15 individuals all with a point to prove, it's the importance of being better collectively," added Jones.

"We've got to make sure we've got our accuracy, and more importantly collectively as a team that we get it right on the night, because that's where we've come unstuck in these fixtures before."

"We've paid them [Tonga] the respect they're due.